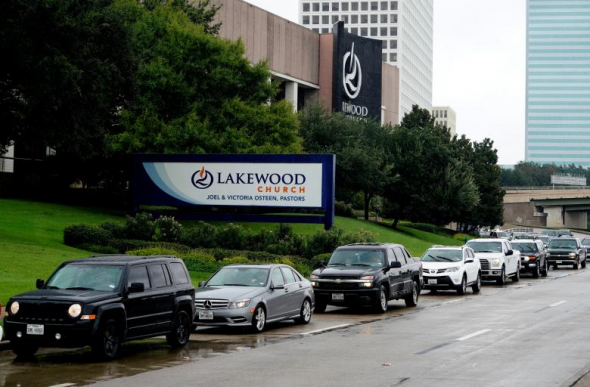 Christian leaders and entertainers are defending Joel Osteen after some in the public and the media bashed the Houston megachurch leader for not initially opening his church doors for Hurricane Harvey victims.

Israel Houghton, former Lakewood worship leader of 15 years, told TMZ that Osteen is the “real deal” on and off stage.

“Every time there’s been a natural disaster in Houston, Lakewood has always been on the forefront of helping out and this is not gonna be any exception,” Houghton said.

The Grammy award winner backed up Osteen’s claims that the church was, in fact, flooded.

“They were criticizing out of ignorance we know the whole story. The bottom floor of Lakewood was in danger of being flooded. Now that it receded, everybody’s good,” Houghton asserted.

The Weather Channel has called Hurricane Harvey “one of the worst flood disasters in U.S. history” and Osteen’s Lakewood Church, the former Compaq Center, is located right in the center of it in Houston. The church was closed over the weekend due to flooding but is now admitting people who have been forced out of their homes in the aftermath of the storm.

Responding to the backlash for not receiving victims sooner, Osteen told TODAY on Wednesday: “I don’t know if it’s unfounded but I think if people were here they’d realize there were safety issues; this building had flooded before, and so we were just being precautious. But the main thing is the city didn’t ask us to become a shelter then.”

“It’s easy to say ‘wow, there’s that big building and they’re not using it.’ But we don’t have volunteers and we don’t have staff that could get here,” Osteen said, noting that people even across the street from the church were stranded due to the flooding. “Think of the story if we would’ve housed a whole bunch of evacuees and the building flooded … We try to use the best wisdom we can … We’ve been here for 60 years to help this city and be a blessing to others and that’s what we’re going to continue to do.”

Even before Osteen clarified the accusations circulating on social media and in the media, some in the Christian community came to the popular pastor’s defense.

In addition to Houghton, Sen. Ted Cruz told CBN News that those attacking Osteen’s Lakewood Church are people who tend to speak negatively of Christians in general

In addition to Houghton, Sen. Ted Cruz told CBN News that those attacking Osteen’s Lakewood Church are people who tend to speak negatively of Christians in general