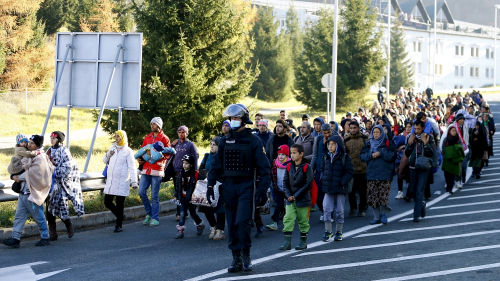 A Fuller Theological Seminary professor says Christianity could be on the rise again in Europe amid reports that Muslim refugees are converting to the faith.

“European churches have struggled for decades to share the Gospel with modern secular Europeans,” Matthew Kaemingk, a professor at the Fuller Theological Seminary in Seattle, Washington, said Monday in an article on Fox News. “They have found Muslim immigrants to be much more open to the message of Christianity.”

The reports come from several European countries that are accepting migrants, including Germany and Austria, which are seeing Muslim converts turning to various denominations, both Protestant and Roman Catholic.

Kaemingk, whose book Christian Hospitality and Muslim Immigration in an Age of Fear is set to be published this fall, believes that ordinary Europeans feel their material comforts replace God.

“Europeans are wealthy, comfortable, healthy, and powerful,” he said. “In short, they don’t think they need God.”

Earlier in March, the Austrian Catholic Church reported that its adult baptismsmore than doubled in 2016, which it credited to the influx of migrants from Muslim-majority nations.

Austrian Cardinal Christoph Schönborn said at the time of the news that it was a “great and moving day for the Church of Vienna.”

“That they want to follow Christ and live in his fellowship is also a call to us — which we have the happiness and privilege of growing up in faith from childhood, but may have forgotten how precious this is,” Schönborn said, according to Die Presse.

The migrants have had to undergo church baptisms behind closed doors, however, as Muslims converting to Christianity is a highly sensitive topic in Islam, and there are fears the new believers could be targeted even by their own family members.

“They experience racism, poverty, exclusion, discrimination, language and cultural barriers, and a deep sense of displacement,” the professor said.

“Their sense of homelessness is not only geographical, it is spiritual. Churches who offer these Muslims real and meaningful hospitality are seeing some surprising results.”

Even though many Muslims are converting to Christianity, Islam is also growing in Europe.

A Pew Research report published earlier this month said that by the year 2050, Muslims will comprise 10 percent of the European population, and by the end of the century Muslims will outnumber Christians worldwide.

The leaders from the Council of European Bishops’ Conferences met with 12 representatives of the Orthodox Churches in Europe in Paris back in February, where they jointly said, “[O]ur societies are turning to their spiritual resources, to draw out means of responding to the situation that Europe is experiencing, and to trace the path ahead for a future full of hope and greater confidence.”

The Christian leaders insisted that now more than ever, Europe needs “the breath of faith in Christ and the hope that it provides.”

“Christianity is a marker of identity that does not deny others their human rights, but seeks to cooperate with all for the realization of the common good,” the joint statement added.