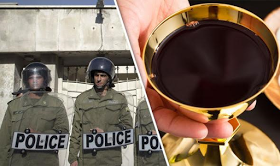 A Sharia court in Iran has sentenced three Christians; Yaser Mosibzadeh, Saheb Fadayee and Mohammed Reza Omidi, to 80 lashes of the cane each, after finding them guilty of basphemy for drinking Holy Communion wine during communion service.
The trio converted from Islam to Christianity earlier this year and were said have consumed alcohol during a Holy Communion service which Iranian authorities said was against the principle of the Sharia Law.

The trio were later arrested at a house church gathering in Rasht, Iran, and charged to court by Iranian authorities for consuming alcohol.

Mosibzadeh, Fadayee and Omidi spent weeks in prison before finally being released on bail, but will now be subjected to the cruel punishment of being flogged in the public after being found guilty by Islamist judges.

Security agents also raided the home of their pastor Yousef Nadarkhani and his wife Fatemeh Pasandideh and arrested them at the same time, but they were not detained.

According to reports, it is not illegal for Christians to drink alcohol in Iran but under Islamic law, Muslims are forbidden from drinking or converting to Christianity because the Sharia Law sees it as illegal.