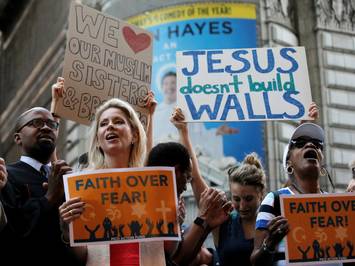 The day after the election a close friend and colleague of mine who came to the U.S. as a war-refugee from Iraq, called me asked this simple question: “Jason, can I still go to Watermark Church to meet you for coffee today?”

I had no idea why he would ask me this as he and I meet there regularly due to its location, community coffee shop and co-working space.

My friend then followed the question with “you know, can I still go there since the election and I am Muslim?”

I was dumbfounded. The immediate repercussion of Donald Trumps election victory had sent shockwaves through the American-Muslim community. Trump had publicly cast suspicion on Muslim refugees and American-Muslim citizens and promised to take action accordingly.

I answered my friend by letting him know that our meeting place was completely safe for him. That he was not only protected by those who work and meet there, but also by the laws of our Nation. He went on to tell me how his wife had broken down in tears, sobbing that she was afraid of sending their children to school and she herself afraid if she wore the hijab — the Muslim head covering — out in public what may happen to her.

In 2005 my friend and his family made the desperate decision to leave Baghdad after receiving death threats from sectarian militias. Delivered to their home was a note stating that if they did not leave they would be killed. The note was delivered along with a 9mm bullet — of which they had every reason to believe would be used to kill them if they did not comply. They fled to nearby Jordan and began life as refugees. After only a year in the U.S. their fear has returned to them, this time not at the hands of sectarian militias, but at the sectarian-promise of our president-elect to ensure the safety of non-Muslim Americans.

In fact many Muslim refugees did not send their children to school the day following the election. For refugees this was all too reminiscent of life in Iraq where fear and suspicion of the “other” along with unequal and unjust treatment by the government gave rise to sectarian violence and police mistreatment.

While the election of Donald Trump has become a beacon of hope to some it has initiated a moment of crisis and fear for others. The hope of economic increase, government reform, and border and national security all carry the hallmarks of a country on the rise with a prosperous citizenry. This hope is what prompted many Americans to cast their vote for the now president-elect. But the looming question for Americans who do not fit the White, Christian, Republican mold is one of religious freedom on the one hand and civil rights and personal security on the other.

The hope of these universally desired ideals do not necessitate a zero sum system where those who desire security achieve it as the cost of those who are collectively feared. Due to the reality of international non-state terrorism, i.e., ISIS or Daesh, and its global reach of violent acts as well as extremist recruitment, much of the Western world has reacted not only against known terrorists but against those whom the West perceives as “possible” terrorists as well.

The West has fallen for the logical fallacy that because ISIS proclaims to be Muslim they are simply doing what Muslims are mandated to do. Therefore, since ISIS is evil and vicious it is only a matter of when and where that my Muslim neighbor will act out viciously and violently as well.

The West has been so inundated with this message to the point that even those who do not want to fear Muslims still have some traces of Muslim group-fear in the back of their minds. When even a trace of this type of group fear exists we become vulnerable to the type of fear mongering rhetoric that many politicians have propagated for their own political gain.

Of course, it is rational to fear ISIS. It isreasonable to construct measures that work to rout-out terrorism and radicalization at home and abroad. It is also understandable that the global movement of ISIS has generated real trauma even to distant witnesses. That is, those of us who have only seen its brutality via television may very well be dealing with the introduction of something bad into our lives even without experiencing the violence firsthand.

But if not dealt with rightly these rational, reasonable, and understandable emotions and fears create unfounded prejudice against the very people who have been — to the largest degree — the victims of such atrocity. When group-prejudice of Muslims is allowed to run unhindered we end up persecuting the persecuted.

Fear, prejudice, and bias have blinded many to the humanity, dignity, and image of God in our Muslim neighbors. And due to this blindness we have stood-by while Muslims have become subject to not only the emboldened and violent actions of White, nationalist Americans — who also claim to be Christian — but also by our now president-elect who has talked openly about policies that would at best bring institutionalized suspicion toward Muslims and at worst bar or expel them from this liberal democracy.

As a Christian I ask my fellow brothers and sisters in Christ to consider the humanity, dignity, and image of God in our Muslim neighbor. I ask you to join me in pursing the difficult work of inspecting our hearts and minds, so that fear and suspicion do not rule our lives. And I ask you to join me in pursuing the flourishing of the “other”. I cannot see any better way to embody the words of Jesus when he said that we “will be known by our love”. Our Muslim neighbors need to see and feel our love for them now more than ever if we profess to know Jesus and want to follow His commands to make Him known among every tribe and nation.