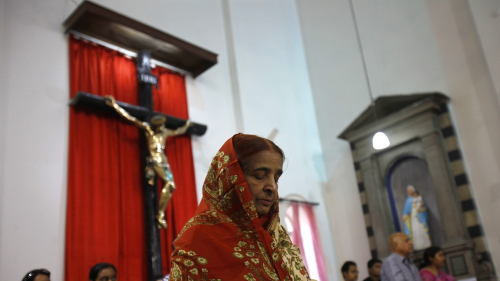 Many Christians in India are reportedly too afraid to celebrate Christmas after Hindu radicals attacked believers on at least two separate occasions in recent weeks.

International Christian Concern and other persecution watchdog groups said one of the attacks occurred last week in Sarangi village, located in Madhya Pradesh State, where a mob of 25 radicals broke into a private house where 30 Christians were singing Christmas carols.

The Christians were dragged onto the streets and beaten, with the radicals reportedly accusing them of carrying out forced conversions in the village. Four pastors were also accused of such conversions and apprehended by authorities. They’re still awaiting bail at a police station.

“We have carol rounds during the day,” a local pastor from the village told ICC. “Because of fear of attacks from the radical Hindu groups, the Christians of this area are scared and cannot celebrate Christianity freely.”

In a separate incident, another 20 Christians from Tikiriya village in Rajasthan State were beaten by 30 suspected radicals with wooden clubs on Dec. 11. Fr. Stephen Rawat, a parish priest who was badly injured in the attack, said Christians are being targeted specifically for their faith.

“I have no enemies. I was beaten because of my Christian faith,” the priest said.

Speaking further with Crux, a Catholic news agency, Rawat explained that the group of Christians, which included women and children, had been singing Christmas carols and it provoked the anger of radicals.

The priest described the attack, which happened when the Christians were walking down the street after caroling at a Catholic home: “While the children ran helter skelter, the women and men were beaten on their hands, legs and backs. The nuns were still in the house, so they escaped the beating. They accused the Christians of converting people and shouted ‘Bharat Mata ki Jai’ (Victory to Mother India).”

“Christians should not fear attacks while celebrating Christmas. It is their right to freely celebrate the religious holidays they hold dear according to India’s constitutional protections,” Stark added.

“More must be done in India’s rural areas to ensure that the religious freedom rights of all citizens are respected and to show that the activities of religious extremists will not be tolerated.”

There have been a number of reported attacks throughout different states in India this past year concerning Hindu radicals accusing Christians of forced conversions.

Bishop Joseph D’souza, a human rights activist and the president of the All India Christian Council, who has been working to cultivate understanding between Christians and Hindus, told The Christian Post in an interview last month that the number of followers of Christ in the country is rising.

He also said that despite the reported attacks, the government of Prime Minister Narendra Modi has not been trying to kindle the rise of Hindu nationalism.

“Right now, like the early Church, we must be in conversation with those who do not understand what God is doing in India and why Jesus and the Church is good for the nation,” D’souza told CP