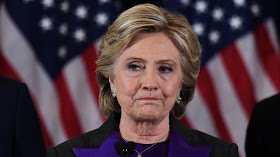 Hillary Clinton has blamed her defeat in
the US presidential election on interventions by the FBI director.

James Comey’s announcement of a new inquiry into her use of email while secretary of state shortly before election day had stopped her campaign’s momentum, Mrs Clinton said.

The Democratic candidate was speaking to top party donors in a phone call, which was leaked to the media.

Protests are continuing against the victory of her rival, Donald Trump.

In New York, about 2,000 marchers headed for the skyscraper where the president-elect lives, shouting “not my president”.

Anti-Trump activists have held daily protests in US cities since his election victory was confirmed on Wednesday.