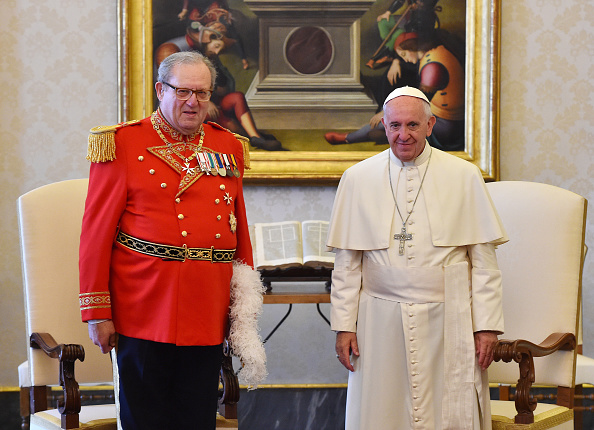 Pope Francis has forced the head of an ancient catholic order – The Sovereign Military Order of Malta – to resign over an abortion dispute that started last year.

The Order is legally similar to a sovereign country, has its own passports and maintains diplomatic relations with 106 states, including the Holy See and the United Nations.

The Order’s mission is summed up in its motto:Tuitio fidei et obsequium pauperum meaning “Defence of the (Catholic) faith and assistance to the poor”.

The Pope had ordered an investigation on December 8 2016, into the sack of Knights of Malta Grand Chancellor Albrecht von Boeselager over his involvement in the distribution of condoms by a charity organisation linked to the Knights of Malta.

One charge used against von Boeteslager concerned a program that the order’s aid group participated in several years ago to help sex slaves in Myanmar, including giving them condoms to protect against HIV infection.

An internal investigation was conducted and von Boeselager admitted he knew about the condoms, which were distributed by other aid programs, not his. The Vatican was informed, Malteser International’s participation in the program ended and an ethics committee was launched to ensure that future projects adhered to Catholic Church teaching

Albrecht von Boeselager had written a petition to the Pope, which led to the Pope constituting a 5-man committee to investigate the sack.

The Order, in December last year, had told Pope Francis that his decision to launch an investigation into the ouster of a top official over a condom scandal is “unacceptable.”

In an extraordinary rebuke of the pontiff, the group said the replacement of its grand chancellor was an “act of internal governmental administration of the Sovereign Order of Malta and consequently falls solely within its competence.”

After the investigation, Pope Francis refused to back von Boeteslager’s sack, but proceeded to ask his boss, Knights of Malta Grand Master Matthew Festing, 67, to resign.

According to CNN, Knights of Malta spokeswoman, Marianna Balfour said on Wednesday that Festing agreed to step down from what would normally be a life-long position, after meeting with the Pope on Tuesday.

In a statement Wednesday, the Vatican said a pontifical delegate will be nominated to govern the Order, which signals a temporary takeover of the group.