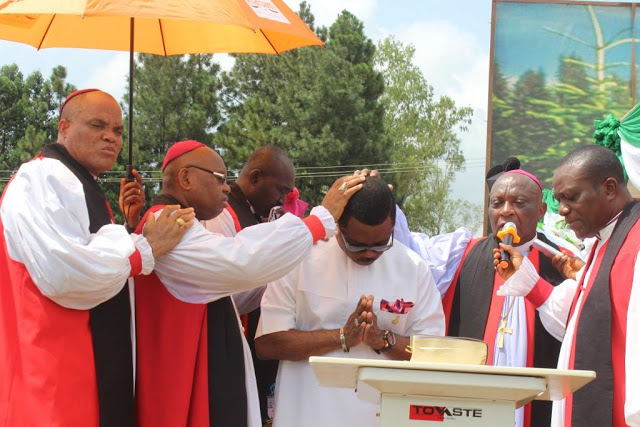 ONITSHA—Anglican Church faithful in the Diocese
on the Niger yesterday embarked on a road show
in the commercial city of Onitsha, Anambra State to
celebrate 159th anniversary of the advent of
Christianity in Igboland, championed by the Church
Missionary Society, CMS, led by Bishop Samuel Ajayi Crowther.

Activities of the events which is celebrated annually
by the Anglican faithful, varied from Diocesan to
Archdeaconry levels.

While the worshippers at All Saints’ Cathedral,
Onitsha, the headquarters of the Diocese on the
Niger embarked on the road show in a convoy of
vehicles along Awka road to drive home their joy,
the Onitsha South Archdeaconry embarked on
prayers, general thanksgiving and drama presentation by the Archdeaconry drama team.

In his remarks, the Archdeacon of Onitsha South
Archdeaconry, Venerable Patrick Nwakalor
emphasised the need for Anglican faithful to hold
tenaciously to their strong heritage as the first
christian denomination to bring gospel to Igboland
in 1857, 28 years before the advent of the Roman Catholic Mission in 1885.

Nwakalor further charged all and sundry to be
selfless in their evangelical attitude as the early
missionaries did, adding that it was the same early
missionaries of the CMS that brought the schools
and hospitals to educate the people and give them
good health, as well as stopped other obnoxious practices in Igboland.

In his sermon, the Parish Priest of St. Faith Church,
Fegge, Onitsha, Rev. Dan Uche, traced the history of
the early missionaries which he said brought
succour to mankind, adding that although slave
trade was officially abolished on March 25, 1807, it
did not stop untill 1833 when a group of evangelical protestants led by William Wilberforce
ensured its final abolition