Dangote Group Promises To Assist FG Out Of Recession 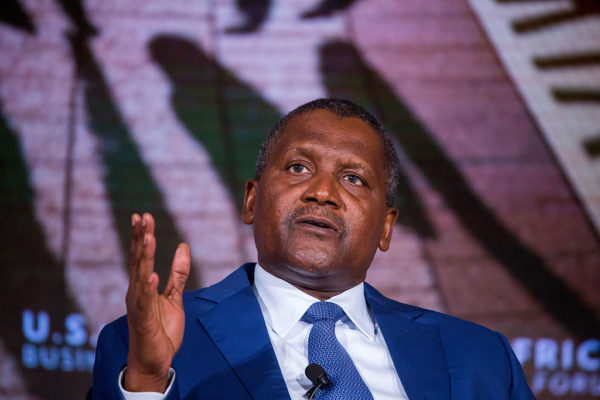 Dangote Group has pledged to support the Federal Government and Kano State in exploring key sectors of the economy to cushion the effect of the recession among Nigerians.

The Group said in a statement on Monday in Abuja, that it would explore opportunities opening up in agriculture, mining and infrastructure, through partnership with the levels of government.

An Executive Director of the Group, Hajiya Halima Dangote, made the pledge at Dangote Special Day ceremony at the Kano International Trade Fair in Kano.

The executive director, who was the special guest at the event, represented the President of the group, Aliko Dangote.

Dangote said challenges of the recession rather presented opportunities to explore areas of development and bring back the lost glory of Nigeria’s economy.

He said it was such determination that informed re-opening of Dangote Flour Mill in Kano as well as the Tomato factory processing project in Kadawa area of the state.

Dangote said the project would have been fully operational but for the hitches caused by Tomato disease in the country and some technicalities.

He reiterated efforts by the group to ensure sustainability in rice production through extensive out-grower programme in Jigawa.

“It is our intention to establish a large scale rice mill of 250,000 tonnes per annum capacity in Kano, to process production in three states,’’ Dangote said.

He re-emphasised that Dangote Fertilisers project, with capacity of 2.8 million tonnes per annum, the largest plant in sub-saharan Africa, would be inaugurated by the end of 2017.

Dangote commended the Kano Chamber of Commerce, Industry, Mines and Agriculture, and the government for their commitment to the business community “as demonstrated by the fair which attracted wide range of businesses from far and near’’.

He assured the chamber of the Group’s willingness to continue partnership and scale up its presence in the years ahead.

President of KACCIMA, Alhaji Umar Dansuleka, said presence of Dangote at the fair was an encouragement to other businesses aspiring for greater heights.

The conglomerate, Dansuleka said, had made a mark across Africa and the globe through its products and services, thereby enhancing image of the country.

Side attraction at the Special day were the wet sampling at the flour stand of the pavilion after dignitaries, led by Halima Dangote and some senior staff of the group, visited the other group’s products stands.