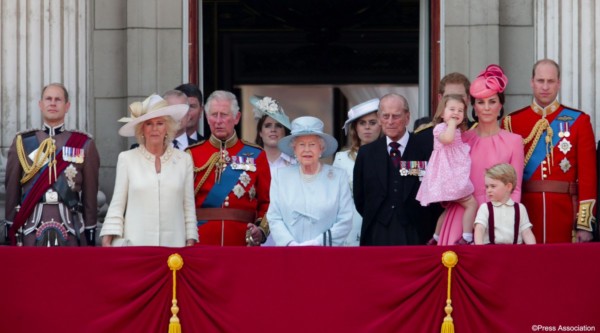 Queen Elizabeth II & members of The Royal Family stand on the balcony of Buckingham Palace to watch the Royal Air Force fly Past during Trooping the Colour ceremony | Photo Credit: Twitter – @RoyalFamily

“It is difficult to escape a very sombre national mood,” Britain’s Queen Elizabeth II said on Saturday in a message to mark her official birthday, following a deadly fire in a London tower block and several terrorist attacks.

“Today is traditionally a day of celebration. This year, however, it is difficult to escape a very sombre national mood,’’ she said. “In recent months, the country has witnessed a succession of terrible tragedies.’’

Elizabeth last month visited those injured in an attack on an Ariana Grande concert in Manchester, and on Friday met people affected by the tower block fire, in which at least 30 were killed with 28 more likely to be dead.

The British capital was also struck by a terrorist attack earlier this month, in which eight people died when three attackers drove into pedestrians on London Bridge and then went on a stabbing rampage.

In March, a man ploughed through passers-by on Westminster Bridge, fatally injuring four, before stabbing to death a policeman outside Parliament.

“During recent visits in Manchester and London, I have been profoundly struck by the immediate inclination of people throughout the country to offer comfort and support to those in desperate need,” the queen said.

“Put to the test, the United Kingdom has been resolute in the face of adversity. United in our sadness, we are equally determined, without fear or favour, to support all those rebuilding lives so horribly affected by injury and loss.”

The queen’s actual birthday is on April 21, but she has an official birthday on the second Saturday in June, when the Trooping the Colour military parade – The Queen’s birthday parade on Horse Guards Parade which displays the discipline of The British Army.