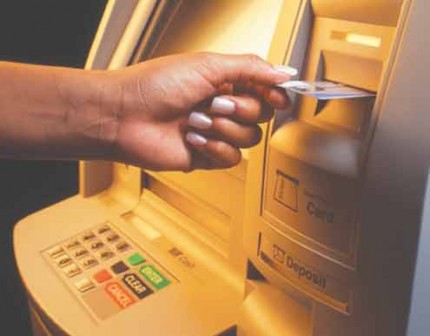 “This is due to the current volatility in the foreign exchange market. Your naira-denominated debit cards can only be used for local transactions at Point of Sale terminals, Automated Teller Machines and online for Nigerian retailers.”

In a text message to its customers on Friday, Stanbic IBTC Bank similarly said, “Dear customer, kindly note that effective October 18, 2016, your ability to carry out transactions priced in foreign currency using our naira debit and credit cards will be suspended. We apologise for any inconvenience in this regard.”

The development will make students studying in the United Kingdom, United States, Canada, Ukraine and other parts of the world to face more challenges getting their monthly stipends from their parents.

Most of the students had relied on the ATM card withdrawal to get their monthly stipends from their parents before now.

This means customers seeking to do foreign transactions will have to open domiciliary accounts and fund same with dollars, pounds or euros purchased from the parallel market at the prevailing exchange rates.

Although other banks have yet to announce the suspension of ATM card services abroad, findings by our correspondent showed that many lenders had reduced drastically the amount that customers could withdraw via ATMs abroad.

This is despite the fact that the banks have in the past few months reduced the monthly total amount of forex-denominated transactions that customers can do, using their naira debit or credit cards via ATMs and PoS terminals abroad as well as online payments or transactions.

As of last week, findings showed that some banks had slashed their daily ATM withdrawal limit abroad from the $300 advised by the Central Bank of Nigeria’s Bankers Committee to $100 due to their inability to source for dollars to fund the transactions.

Top banking officials close to the development told our correspondent under the condition of anonymity that banks were increasingly finding it difficult to fund their foreign-currency denominated services, especially online forex transactions and overseas ATM withdrawals, as well as PoS usage overseas by customers.

A top official of Deposit Money Bank, who spoke on the condition of anonymity, told our correspondent on Sunday, “We have to stop the services. Formerly, we were sourcing forex at high prices and we were selling same to customers at similarly high prices. But the situation is now tense; the dollar scarcity has assumed a new dimension.

“This is coupled with the fact that some bank customers are using the platforms to do round-tripping. It is high time we stopped it.”

The decision by some banks to suspend overseas ATM card services and online forex transactions came barely one week after the CBN, through the Bankers’ Committee, raised concerns about what it called the indiscriminate and suspicious manner in which some bank customers were spending dollars and other foreign currencies abroad through their naira debit cards.

Consequently, the regulator said it had concluded that bank customers who spent above the $50,000 annual forex limit it imposed would be barred from the nation’s forex market.

The Director, Banking Supervision, CBN, Mrs. Tokunbo Martins, stated this after the 329th Bankers’ Committee meeting held at the apex bank’s office in Lagos on Wednesday.

She said, “In the CBN’s move to manage the demand for forex, there was a rule that was put in place that people were not allowed to withdraw more than $50,000 annually on their naira debit cards.

“For a while, the policy has been abused by bank customers, and the CBN has not taken any step to that effect. We have decided to take the step now to enforce the rule. So, we want members of the public to remember that that rule is in place.

“All your accounts are linked to a particular Bank Verification Number. Now, that the BVN only allows you to withdraw only $50,000 per annum, if people continue to breach that rule, they will lose access to forex market.”

Dollar scarcity has been ravaging the economy after the price of crude oil, Nigeria’s main forex earner.

The nation’s foreign exchange reserves have been depleting since then.

On Wednesday, the country’s external reserves hit an 11-year low of $24.21bn, the latest data posted on the CBN website showed.

This means a limited amount of dollars will be available at the official interbank spot market, fuelling concerns over another round of depreciation of the naira.

The foreign exchange reserves fell by $600m in two weeks before shedding $1bn in four weeks, the CBN statistics showed.

An expert at Ernst and Young, Mr. Bisi Sanda, lamented on the dollar pressure on the economy.

He said the Federal Government needed political will to address the issues fuelling dollar scarcity on the economy.

He said, “The issue of dollar is very important to the economy. It is predicated on the fact that we are a dollar-denominated economy. It appears the government is still begging issues as far as the import-dependent state of our economy is concerned.

“We need to fix issues, we need to go back to the drawing board. The CBN said between 2010 and 2016, a total of $11bn was sold to the Bureaux De Change annually. We need to plug leakages in this area.”