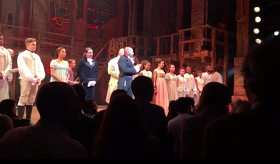 President-elect Donald Trump on Saturday criticized the cast of ‘Hamilton’ for confronting vice president-elect Mike Pence when he attended the Broadway show, Hamilton, Friday night. When the former Indiana governor took his seat at the show, the audience booed him.

At the end of the show, Mike Pence got up to leave while actor Brandon Victor Dixon was giving credits, the actor noticed Mike Pence get up and stopped him to deliver a message.
Dixon read a statement reportedly drafted by Lin-Manuel Miranda, the creator of “Hamilton,” with input from cast members. The statement emphasized the diversity of the show’s actors and their broad concerns about the Trump administration.

“Vice President-elect Pence, I see you walking out but I hope you will hear us, just a few more moments. There’s nothing to boo here, ladies and gentlemen,”

“Vice President-elect Pence, we welcome you and we truly thank you for joining us here at ‘Hamilton: An American Musical’ — we really do. We sir — we — are the diverse America who are alarmed and anxious that your new administration will not protect us, our planet, our children, our parents, or defend us and uphold our inalienable rights, sir. But we truly hope that this show has inspired you to uphold our American values, and to work on behalf of all of us. All of us. Again, we truly thank you for sharing in this show, this wonderful American story told by a diverse group of men and women of different colors, creeds and orientations.”

Well said. And the crowd agreed and clapped ..

Donald Trump this morning, took to his twitter page to criticize the cast for confronting Mike.
He tweeted: 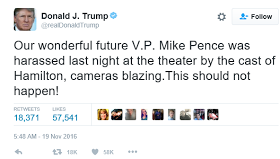 Tonight, VP-Elect Mike Pence attended #HamiltonBway. After the show, @BrandonVDixon delivered the following statement on behalf of the show. pic.twitter.com/Jsg9Q1pMZs 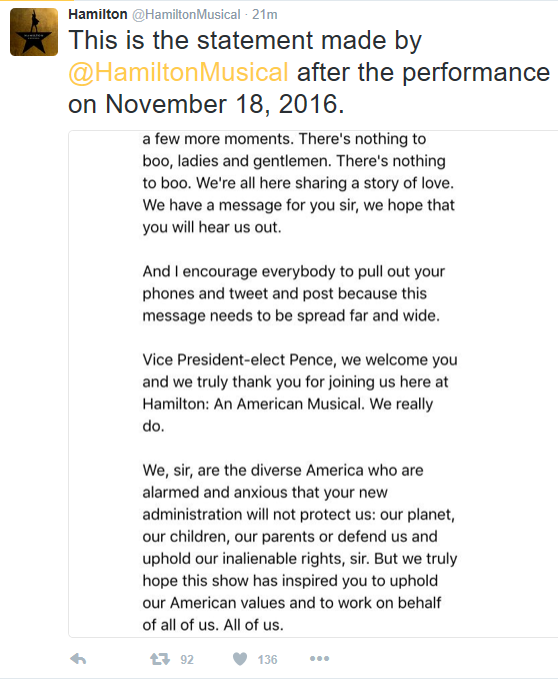