Donald Trump Explains Who Jesus Is 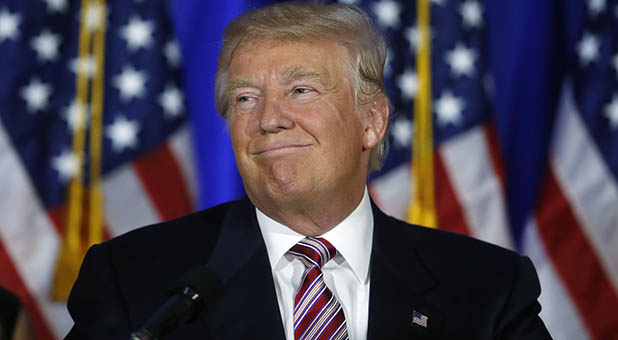 Republican presidential nominee-in-waiting was
asked to describe who Jesus is. (Reuters photo)

During an interview Wednesday with Cal
Thomas, Republican presidential nominee-in-
waiting Donald Trump was asked, “Who do you
say Jesus is?”

“Jesus to me is somebody I can think about for
security and confidence,” he said. “Somebody I
can revere in terms of bravery and in terms of
courage and, because I consider the Christian
religion so important, somebody I can totally rely
on in my own mind.”

Thomas further pressed during the interview
about Trump’s now-infamous response to
pollster Frank Luntz in which he said he had
never asked for forgiveness. The GOP front-
runner seemed to have had a change of heart on
that issue.

Trump also addressed the issue of his outreach
to Christians:

“As you know, I am Presbyterian and Protestant.
I’ve had great relationships and developed even
greater relationships with ministers. We have
tremendous support from the clergy. I think I
will be doing very well during the election with
evangelicals and with Christians.”

He also addressed the issue of Christian
persecution around the world, particularly in the
Middle East.

“In the Middle East—and this is prior to the
migration—you had almost no chance of coming
into the United States,” he said. “If you were a
Muslim from Syria, it was one of the easiest places
to come in (to the U.S.). I thought that was
deplorable. I’m going to treat my religion, which is Christian, with great respect and care.”