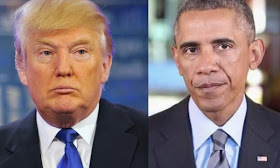 President Barack Obama on Tuesday blasted
Donald Trump, saying he was unfit to be president
and even criticized the Republican party for
supporting Trump. Trump has now fired back at
Obama saying he and Clinton are responsible for
destabilizing the Middle East and helping ISIS grow.

Hillary Clinton has proven herself unfit to
serve in any government office,” a Trump
statement said.

“Obama-Clinton have single-handedly
destabilized the Middle East, handed Iraq,
Libya and Syria to ISIS, and allowed our
personnel to be slaughtered at Benghazi.”

Later on, in an interview with WJLA, Trump
continued;

He’s a terrible president. He’ll probably go
down as the worst president in the history
of our country. He’s been a total disaster.”