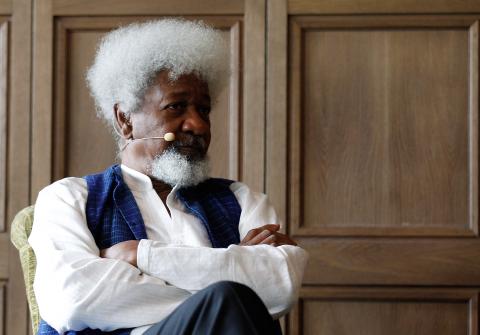 The victory of Donald Trump in the U.S. presidential race could jeopardize U.S. support in Nigeria’s fight against Boko Haram, according to Nigerian Nobel Prize winner Wole Soyinka.

In an exclusive interview, Soyinka tells Newsweek that Trump’s “bunker mentality” could see the U.S. withdraw support for counter-terrorism operations in West Africa.

The Nigerian author and playwright also says that he will not destroy his U.S. residency permit just yet, despite a pre-election pledge to “cut” his green card, which is afforded to immigrants granted permanent residence in the country.

Boko Haram, an Islamist militant group, launched an armed insurgency against the Nigerian government in 2009, killing thousands and displacing more than 2 million since then. The group also pledged allegiance to the Islamic State militant group (ISIS) in 2015, though it has recently split into factions following the appointment in August of an ISIS-approved leader.

Under the administration of Barack Obama, the U.S. has provided financial support and military training to West African countries fighting Boko Haram. The U.S. provided $71 million worth of equipment, logistics and training to five countries—Nigeria, Cameroon, Chad, Niger, and Benin—that together formed a joint task force in 2015 to fight the militants, according to a February fact sheet from the U.S. State Department.

Obama also approved the deployment of up to 300 U.S. military personnel to Cameroon in October 2015 to carry out intelligence, surveillance and reconnaissance operations in the region.

“One should expect that level of collaboration to diminish. Trump’s mentality is one of, ‘What are we doing there? What business do we have over there?’” says Soyinka, speaking to Newsweek from New York.

“I foresee Trump dismissing that kind of expectation offhand and closing in, shrinking, becoming smaller in terms of [the U.S.’s] presence in other parts of the world,” he says.

Nigerian President Muhammadu Buhari extended his congratulations to Trump on Wednesday, saying that he looked forward to working with the president-elect “to build on and strengthen relations between Nigeria and the U.S.”

Trump had little to say about U.S. foreign policy towards Africa in general and Nigeria specifically during his presidential campaign. While he has vowed to pursue ISIS in Syria and Iraq, the Republican has made no mention of whether he intends to persist with or discontinue the country’s support for counter-terrorism efforts in West Africa. Newsweek contacted the Trump campaign for further comment but received no immediate reply.

An analysis by South Africa-based thinktank the Institute for Security Studies (ISS) suggested that Trump could become “the single most effective recruiting tool for terrorist organizations across the globe,” including in Africa. The ISS cited Trump’s hardline rhetoric towards Muslims, his advocation of the use of torture and expressed desire to target the families of militants all as potential factors in Trump being used by militant groups in recruitment drives. Trump’s campaign pledge to temporarily ban Muslims from entering the U.S. has already been used in a propaganda video by Al-Shabab, a Somali militant group aligned with Al-Qaeda.

Soyinka is based between Nigeria and the U.S., where he is affiliated to several universities. In a recent discussion with students at the University of Oxford in the U.K., which was shared in a video on October 27, the author vowed to destroy his green card should Trump be declared the winner of the election.

Following the announcement of Trump’s victory on Wednesday, Nigerians took to social media to question Soyinka about whether he would honor his pledge.

The Nigerian author—who was the first African to win the Nobel Prize in literature in 1986—says he is biding his time until Trump is inaugurated in January before deciding on his next steps.

“Why don’t we wait until Trump actually takes office?” says Soyinka. “I’m just going about my normal commitments, but definitely not getting into any more commitments. Let’s put it that way for now.”