Donald Trump Ready To Ask God For Forgiveness, But ‘Not Much’ Of it 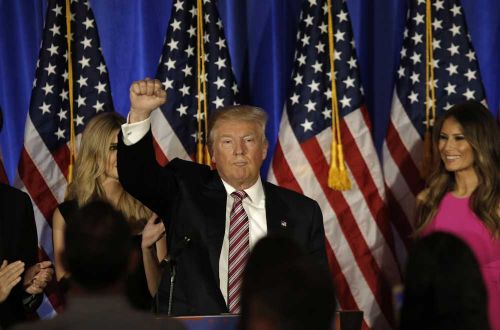 Republican presumptive presidential nominee
Donald Trump said in a recent interview that he
is ready to ask God for forgiveness in his life,
but hopes that he won’t have to do it often.

Trump made the remarks in an interview with political columnist Cal Thomas on Wednesday,
where he followed up on past comments when
he had said he’s unsure if he’s ever asked God
for forgiveness.

“We have tremendous support from the clergy.
I think I will be doing very well during the
election with evangelicals and with Christians.”

Back in July 2015 the billionaire businessman had said that “I try not make mistakes where I
have to ask forgiveness.”

Trump is scheduled to meet with 500 of the top evangelical and social conservative leaders in America on June 21 in New York City.

Some of those conservatives, including Family
Research Council President Tony Perkins,
revealed that the purpose of the meeting is to
ascertain what Trump has to offer the country.

“I want to be actively supportive of a candidate
who can help turn this nation around. With
Trump – I’m not there yet. I hope to be there –
but I’m not there right now,” Perkins said back
in May.

The Republican candidate has butted heads with some notable Evangelicals, however, such as Russell Moore, president of
the Southern Baptist Convention’s Ethics &
Religious Liberty Commission, who has been
highly critical of his campaign.

Trump tweeted back in May: “@drmoore
Russell Moore is truly a terrible representative
of Evangelicals and all of the good they stand
for. A nasty guy with no heart!” after Moore
had warned that supporting Trump is an
“embrace of the very kind of moral and cultural decadence that conservatives have been
saying for a long time is the problem.”

In his interview with Thomas, Trump was
asked to explain who Jesus Christ is to him, to
which he answered:

“Jesus to me is somebody I can think about for
security and confidence,” Trump said.

He added: “Somebody I can revere in terms of
bravery and in terms of courage and, because I
consider the Christian religion so important,
somebody I can totally rely on in my own
mind.”

The GOP candidate criticized Democratic
presidential rival Hillary Clinton on a number of
topics, and suggested he would be better
suited to address ongoing persecution of
Christians around the world.

“Not since medieval times has anyone seen
anything like this. I couldn’t have built the
great companies I’ve built if I didn’t have a
strong temperament. And she’s (Clinton) got a
weak temperament. She’s a weak person. I
think she would make a horrible president.”