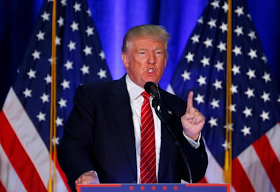 Donald Trump’s campaign motto is ‘ Make America
great again’ but with every new passing day, with
every new remark it seems he wants to make
America grasp. On Tuesday he told the people of
Wisconsin, a town with 2% black population that
African-Americans should vote for him because Hillary Clinton and the Democratic party panders to
them.

While delivering his speech at a rally in West Bend,
Wisconsin, he said his rival Hillary Clinton was
“against the police” and said the Democratic
Party’s policies have “betrayed” African-American
communities.

“We reject the bigotry of Hillary Clinton,
which panders to and talks down to
communities of color and sees them only as
votes — that’s all they care about,” Trump
said to his white audience. To every voter in
Milwaukee, to every voter living in the inner-city or every forgotten stretch of our
society, I’m running to offer you a much
better future, a much better job,” Trump
continued.

He added that Clinton gave a supportive nod to
“those peddling the narrative of cops as a racist
force in our society.” His comment comes after the
nearby city of Milwaukee was hit with a wave of
violence following the death of Sylville Smith, 23
on Saturday. Authorities said the cop shot Smith after he refused to drop an illegal handgun.

Cars and businesses were set ablaze in the
following days in Milwaukee following Smith’s
deaths as blacks riot and protest over his death.

“The war on our police must end and it
must end now. Law and order must be
restored, It must be restored for the sake of
all, but most especially for the sake of those
living in the affected communities, of which
there are many