Donald Trump To Evangelicals: 1 John 4:12 Is What America Needs To Be Great Again 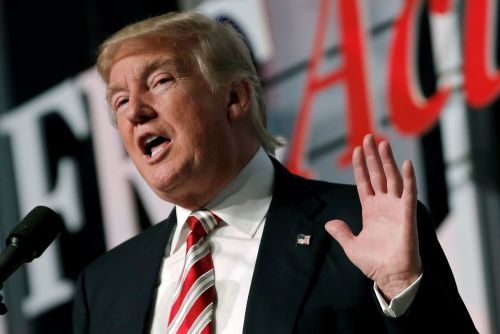 WASHINGTON — While courting religious
conservatives and evangelicals Friday afternoon,
Republican presidential nominee Donald Trump
vowed to protect and defend America’s Christian
heritage and asserted that the message from 1 John 4:12 is what America needs to model itself after, if it hopes to truly be great again.

Speaking at the Family Research Council’s Values
Voters Summit, Trump began his 45-minute speech
by thanking evangelicals for their support in the
primary elections and vowed to make it up to
evangelicals if he is elected president.

“I’m going to make it up to you too, you watch,”
Trump said. “There are no more decent, devoted, or
selfless people than our Christians brothers and
sisters here in the United States.”

“Your values of love, charity and faith built this
nation,” Trump continued. “So how can it be that
our media treats people of faith so poorly? One of
the reasons is that our politicians have
really abandoned you, to a large extent. And Hillary
Clinton, you can forget about her.”

Trump promised that under his administration, “our
Christian heritage will be cherished, protected,
defended, like you have never seen before.”

But as Trump and many Americans feel that the
nation has become extremely divided, Trump contended that it can only be America’s “faith in God” and “His teachings” that will reunite the country. He stressed that “we all come from the same Creator” and if Americans can remember that fact, “then our future is truly limitless.”

“There is a biblical verse that I have often read and I want to repeat it again because I feel it is so important to what we are trying to achieve right
now in our country,” Trump stated. “It is from First
John, Chapter 4.”

“No one has ever seen God; but if we love one another, God lives in us and His love is made complete in us,” Trump recited, followed by cheers.

“Imagine what our country could accomplish if it
started working together as one people under one
God, saluting one flag,” Trump added, followed by
another round of cheers.

Trump struck some chords with the evangelical
audience in attendance, saying that a President
Trump would reinstate pastors’ and churches’
rights to political speech, saying that he was proud
to say that his call to repeal the Johnson
Amendment was all his idea.

“All religious leaders should be able to freely express their thoughts and religious matters,” Trump stated. “I will repeal the Johnson
Amendment.”

“I will also fight for the American family and
American family values,” Trump said. “The family
must be at the center of any anti-poverty agenda,
must be.”

He also vowed to appoint Supreme Court justices
that will uphold the rule of law as it is written.

Trump added that the next president could be responsible for picking anywhere from three to five Supreme Court justices and warned that people should be alarmed by the prospect of Clinton-
appointed judges.

“[S]he knows the extremist judges she would pick
would be rejected by the overwhelming majority of
the American public. They’d be rejected,” Trump
said. “Clinton’s judicial picks would allow her to
completely take over American health care, the
American economy, and Americans religious liberty – not to mention your Second Amendment, which is
on very thin ice right now, as you know, because of
the fact that we’re at four-and- four.”

Although Trump thanked evangelicals for helping
him win the Republican nomination, he warned
against the prospect of the influential voting bloc
not showing up to the polls in November, saying
this could be their “last opportunity” to protect
religious freedoms and eliminate the Johnson Amendment.

Additionally, Trump accused evangelicals of not
showing up to the polls in 2012 when Mitt Romney
was the Republican nominee, a charge that
appeared to bother some in the crowd.

“Believe me, I know. I look at the stats. You didn’t
vote. But this time you really have — and this is
your last chance,” Trump argued. “This is it. I mean,
we’ll never have this opportunity again. So I hope
you can get every one of your friends and just get
up — your family and your friends, and get out and vote, OK?”