Donald Trump to Nominate Ben Carson as Secretary of US Dept. of Housing and Urban Development 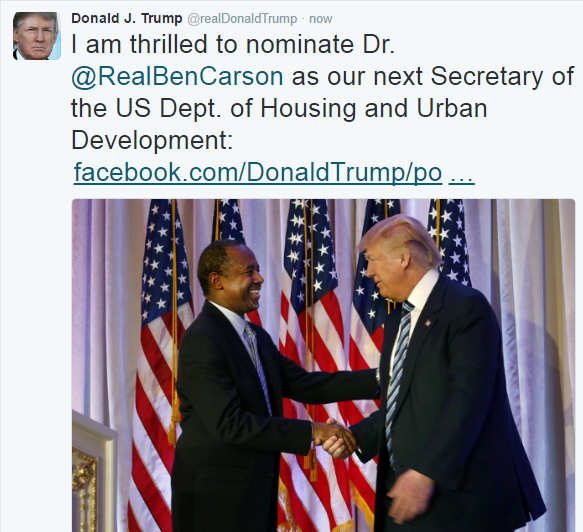 President-elect Donald Trump on Monday announced his intent to nominate Dr. Ben Carson to serve as Secretary of the United States Department of Housing and Urban Development (HUD).

Dr. Carson is a distinguished national leader who overcame his troubled youth in the inner city of Detroit to become a renowned neurosurgeon who served as the director of pediatric neurosurgery at Johns Hopkins Hospital in Maryland.

“I am thrilled to nominate Dr. Ben Carson as our next Secretary of the U.S. Department of Housing and Urban Development. Ben Carson has a brilliant mind and is passionate about strengthening communities and families within those communities. We have talked at length about my urban renewal agenda and our message of economic revival, very much including our inner cities. Ben shares my optimism about the future of our country and is part of ensuring that this is a Presidency representing all Americans. He is a tough competitor and never gives up.

I am honored to accept the opportunity to serve our country in the Trump administration,” said Dr. Carson. “I feel that I can make a significant contribution particularly by strengthening communities that are most in need. We have much work to do in enhancing every aspect of our nation and ensuring that our nation’s housing needs are met,” Trump said.

Ben Carson was born in Detroit, Michigan on September 18, 1951. While his mother lacked access to a quality education, she encouraged her sons in their scholastic pursuits and instilled the value of hard work. Carson graduated with honors from Southwestern High School, where he also became a senior commander in the school’s ROTC program. He earned a full scholarship to Yale University and graduated in 1973 with a B.A. degree in psychology.

Carson then enrolled in the School of Medicine at the University of Michigan, choosing to become a neurosurgeon. Dr. Carson became the director of pediatric neurosurgery at Johns Hopkins Hospital at age 33 and earned fame for his groundbreaking work separating conjoined twins.

Twenty years ago, Carson and his wife Candy started the Carson Scholars Fund, which is now active in all 50 states and the District of Columbia. It has provided more than 7,300 scholarships since 1994 to students from all backgrounds that achieve at the highest academic levels and community service. It also encompasses the Reading Room program and reading rooms have been placed throughout the country to stimulate a love for reading, especially in those who are underserved.

In 2000, the Library of Congress selected Dr. Carson as one of its “Living Legends.” The following year, CNN and Time magazine named Dr. Carson as one of the nation’s 20 foremost physicians and scientists. In 2006, he received the Spingarn Medal, the highest honor bestowed by the NAACP. In February 2008, President George W. Bush awarded Dr. Carson the Ford’s Theatre Lincoln Medal and the Presidential Medal of Freedom