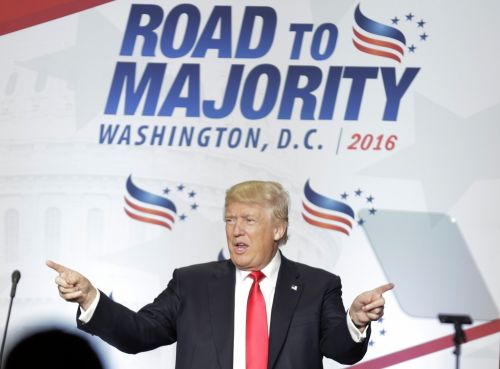 WASHINGTON — Presumptive Republican
presidential nominee Donald Trump told a
gathering of conservative Christians on Friday
that he will “restore faith to its proper mantle”
in America if he is elected the next president of
the United States in November.

The billionaire real estate mogul was the
keynote speaker at the Faith & Freedom
Coalition’s 2016 Road to Majority Conference
and assured values voters that he will do all he
can to protect the rights of people of faith to
live and raise their children in accordance with their religious beliefs.

As some conservative Christians remain
hesitant to vote for Trump as the “lesser of two
evils” in the general election, Trump stressed
that unlike presumptive Democratic nominee
Hillary Clinton, he will protect and not infringe
upon religious freedoms of Americans.

“People who go to church, who work and
work in religious charities and so forth and
share their values, these are the foundations of
our society,” Trump argued. “We will restore
respect for people of faith, who dutifully raise
their children, follow our laws and rules and we have to really take care of them. We have to
take care of our neighbors. Right now, our
neighbors are not being taken care of. We have
to restore the rule of law on our border, in our
government.”

Much of Trump’s speech served as an attack on
the former secretary of State. He argued that
people shouldn’t vote for Clinton because she
is only beholden to her donors, such as the
nation’s largest abortion provider Planned
Parenthood. Clinton was delivering a speech to Planned Parenthood around the same time.

Trump promised that he will only be beholden
to the American people.

“Bottom line is that I will be working for you …
Together, friends, we will chart new optimistic
course for America. We will put America first,”
Trump said. “We will restore faith to its proper
mantle in our society. That is what we have to
do and we will do that soon. We will respect and defend Christian Americans — Christians.”

“We will give parents control over their
schools,” he continued. “We will uphold the
values our founders gave us, which we are not
doing now. We will work together to rebuild
and restore everyone, not a certain group,
everyone, the whole country.”

Trump also argued for the importance of
defeating Clinton because of the major
implications the 2016 election has on the
Supreme Court.

As many suspect that the next president could
be responsible for appointing as many as three
Supreme Court justices, Trump highlighted his recently released Supreme Court short list. Trump told the crowd that all 11 judges on his
list are pro-life.

“We want to uphold the sanctity and dignity of
life [and] marriage and family as the building
block of happiness and success,” Trump said.
“I know many, many successful people and the
happiest people are people that have that great
religious feel and that incredible marriage and children. That is more important than the
money, folks, believe me. I know plenty of
people with lots of money and they are not
happy. ”

Trump, who has previously called for a ban an
all Muslim immigration into the United States,
warned that Clinton wants to let as many as
500,000 refugees into the United States. As
soon as Trump brought up the topic of
immigration, his speech was interrupted by a group of protestors. The protesters chanted
things like “Refugees are welcome here!” and
“Stop Trump!”

The protesters were quickly escorted out of the
conference hall by security.

“What is happening in our country is so sad.
We are so divided,” Trump said in response to
the protesters. “It is such a shame. By the way,
these are professional educators, folks.”

While Trump spoke to Christian conservatives
in Washington on Friday, Clinton was in D.C. on
Friday to speak to the national conference of
Planned Parenthood.

“I’ve been proud to stand with Planned
Parenthood for a long time, and as president, I
will always have your back,” Clinton said at the event.