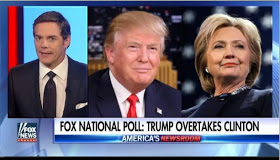 Presumptive U.S presidential Republican nominee
Donald Trump beat rival Hilary Clinton by a small
margin in a new national poll for registered voters
conducted by Fox News. Donald Trump held a
slight 45% to 42% lead over Hillary Clinton and
even though the margin is little, it goes to show the growing support for Donald Trump’s
candidacy.

The poll result, released on Wednesday night
shows an improvement for the billionaire
businessman from a Fox national poll in April
showing Clinton on top, 48% to 41%.

Republicans, however, express more enthusiasm
about the election, with 74% saying they are
extremely or very interested in the election,
compared to 66% of Democrats who say the same.
Trump has more double figures from male voters,
while Hilary achieves the same quota for female voters while majority of voters feel both front-
runners lack strong moral values and will say
anything to get elected.