Catholic Priest and Spiritual Director of 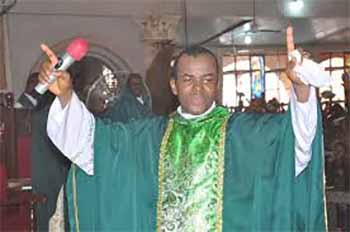 Adoration Ministry, Emene, Revd Fr. Ejike Mbaka has called for prayers for President Muhammadu Buhari and has absolved him of blame in the country’s economic challenges.

Fr. Mbaka, however, reassured Nigerians that the current economic condition in the country will soon be over.

In a sermon to mark the opening of the 2016/2017 Legal Year, organised by Enugu State Judiciary, Mbaka who prophesied Buhari’s victory in the 2015 presidential election recalled that, in 2012, he prophesied that doom time would follow the oil boom, if there was no good planning of the country’s resources.

“But, the past administration was one of ‘LOOT AS MUCH AS YOU CAN.’ Look at a place like the Niger Delta and one of them became president and did nothing for his people and now, you want Buhari to perform magic. But, we are a mono economy and every country depending on oil is suffering the same fate with Nigeria today.

“The tap root of Nigeria’s economy has been cut; Buhari is just trying to hold a rolling vehicle; a vehicle that the brakes have been destroyed.

“So, Buhari is not the cause. If (former President Goodluck) Jonathan was the president today, the situation would have been worse.[/color]

“Economic recession will not last long; the solution will come in a super natural way.

“Just like Ebola, we thought everybody would die; where is it now? Recession will go as Ebola has gone.

So, all we have to do is to pray for Buhari; he has good agenda but, many around him are planning to pull him down.”

On the recent arrest of judges by the Department of State Services (DSS), Mbaka said Nigerians are beginning to lose hope in the Judiciary, “but with Buhari’s revolutionary experience going on, I am not saying that all who are accused are guilty but, I am saying that judges ought to remain incorruptible.

“If they are corrupt, they should be arrested and whoever arrests them should be praised.

“So, if president Buhari has that courage, that lion heart, to touch the tiger’s tail, he is a hero.”

Mbaka lauded the performance of Governor Ifeanyi Ugwuanyi of Enugu State and described it as “an exemplary display of visionary leadership which has enthroned peace, uniting diverse political interests.”

He called on the people of the state to continue to support his government which he said has been anointed by God.

In his speech to mark the legal year, Acting Chief Judge of Enugu State, Justice N.P Emehelu commended the governor for giving rapid response to the needs of the Judiciary by providing the necessary requirements for the appointments of judges in the state as well as facilitating supervisory duties of the Customary Court of Appeal.

She made a request for a befitting Customary Court of Appeal complex in Enugu as well as complexes for the high courts and Magistrate Courts outside Enugu and called for more slots to be given the judiciary for appointment of high court judges following depletion in the number of judges occasioned by deaths and retirements.

Justice Emehelu thanked the Bar and Bench in the state for their cooperation urging them to redouble their efforts for a quicker and better dispensation of justice.

“I have noted the concern and suggestions of the Nigeria Bar Association as well as those of the learned magistrates and I wish to assure that God willing, we will partner with you in addressing those concerns and issues