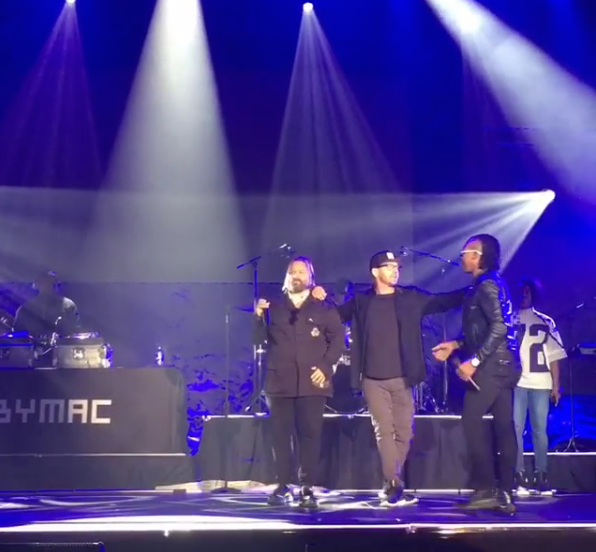 Tuesday’s show at the Allen Arena at Lipscomb University in Nashville, Tennessee, surprised everyone in attendance when rock/rap trio DC Talk hit the stage together following a 16-year hiatus. TobyMac kicked things off by performing one of his songs and then brought out bandmates Kevin Max and Michael Tait to perform “Love Feels Like,” a new tune that brought the three together in the studio this past year.

As the award show continued, Lauren Daigle earned the night’s top honor for the prestigious category of “Artist of the Year,” just one year after being named the best “new artist” in Christian music by the association.

The theme for the 2016 Dove Awards was “Love Amplified,” which speaks to the collective power of unity when Christians come together with one voice. As artist after artist hit the stage to accept their awards, everyone stuck to the theme of the night, particularly gospel pioneer Kirk Franklin.

He took the stage to accept his award for “Gospel Artist of the Year” and urged his fellow Christian family to ask their audiences and congregations to “pray with us for racial healing.”

“Song of the Year – “Good, Good Father” by Chris Tomlin

Songwriter of the Year – Lauren Daigle

Contemporary Christian Artist of the Year – for KING & COUNTRY

Artist of the Year – Lauren Daigle

Producer of the Year – Bernie Herms

Rock/Contemporary Recorded Song of the Year – “Happiness” by NEEDTOBREATHE

Worship Song of the Year – “No Longer Slaves” by Bethel Music

Worship Album of the Year – EMPIRES by Hillsong UNITED

Rap/Hip Hop Album of the Year – Therapy Session by NF

Rock/Contemporary Album of the Year – The Wonderlands: Sunlight & Shadows by Jon Foreman

Southern Gospel Album of the Year – Still by Booth Brothers

Trinity Broadcasting Network (TBN) will air the awards show on Sunday, October 16, reaching over 100 million viewers in the U.S. and around the world. To see a list of winners in additional categories visit doveawards.com/2016-winners