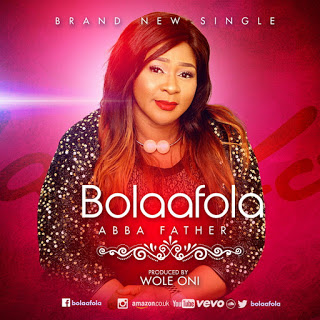 Beautiful Afro-Pop tune titled “Abba Father” by UK based Gospel singer Bolaafola drops! It is creatively crafted so that the single merges the conventional
praise vocals with urban instrumentation,
to deliver an appeal for both the church
and other pure entertainment gathering.

Music has always been part of Bolanle A.
Folasire (Bolaafola ) since childhood. She
was born and brought up in Nigeria
although based in UK now. She attended
Ibadan Polytechnic where she obtained
her OND in accounting.

“Abba Father” is off her upcoming album.
Bolaafola writes and composes her songs
but this does not go without the guidance
and direction of award winning producer Wole Oni who has been instrumental to the putting together of her album and also
produced ‘Abba Father”.

Bolaafola has promised to release more
works off the album as the story unfolds.