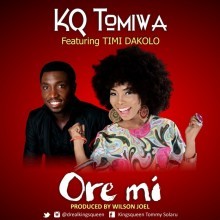 KQ Tomiwa is back with a bang as she drops “Ore Mi” featuring Timi Dakolo and produced by Wilson Joel.

She debuted with the single “Ife Otito” in 2014. The single was complemented with a beautiful
video directed by T-Frizzle for Frizzle and Bizzle Films. KQ Tomiwa has raised her own yardstick with the release of the timeless “Ore Mi” featuring Timi Dakolo.

“Ore Mi” is a fusion of Highlife and R&B, KQ Tomiwa and Timi Dakolo did a brilliant job in capturing the essence of the song and brought it
to life through their soulful, playful and sincere
to-the-heart vocal expressions.

KQ Tomiwa has got her acts together. Stylist, singer, fashion blogger and she’s acing it all! She
does not impose any restrictions on her genre of
music as well as her different styles of
expression. Her creative expressions though
fashion is simply out of the box. She currently
runs a style blog she calls ‘’Style & Strings’’, her platform through which she expresses her
personal style, her poetry and music. She has
been singing since age 6 and still sings with her
church choir till date. She was a part of a girl
group called the Rare Gems while she was studying at the University of Lagos, in the early
part of 20th century and they had a single titled “A King” which enjoyed airplay around the nation. Her inspiration is primarily God, the giver
of all talents as well as various life experiences.

“’Ore Mi’ is a pure expression of friendship & love in one, as you cannot separate love from
friendship, there is no love without friendship
and there isn’t true friendship without true
undiluted love,” says KQ Tomiwa

The online release of “Ore Mi” precedes the release of her compact disc collection which will
be distributed for free.