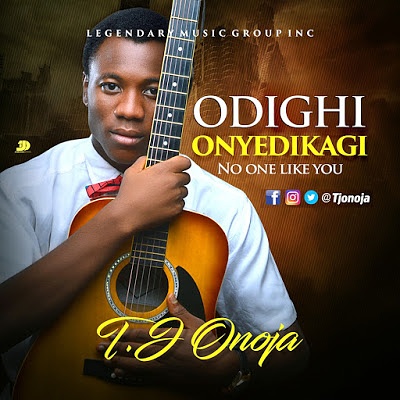 Legendary Music Group Inc. founder, “T.J Onoja” finally drops one of his much anticipated worship song, titled: “Odighi Onye Dika Gi. The song ‘Odighi Onye Dika Gi’ which means ‘No One Like You’ in Igbo language is a powerful worship song that will definitely bless y’all. It serves as a follow-up to his previous hit song ‘Ekpere’.

In His Words; “When God dropped the song in my heart, I knew it will be this powerful. I never knew the meaning of the song at first, but it kept sounding in my spirit over and over again and i never ceased from singing it. The song is a blessing to me and, i as well believe it will be a blessing to you too.” After the successful release of his previous songs and his newly released worship song, titled: ”Odighi Onye Dika Gi’, it became clear that T.J Onoja is called for this purpose.Prod. by Kopji | M.M by rocksKING