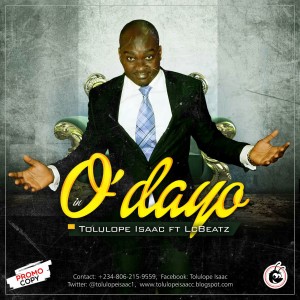 Tolulope Isaac has been into the music ministry for
up to 5 years now. Asides being a music minister,
he also works in a Financial Institution presently.
He started playing the bass guitar at a young age
and was known in his home town so well then his
passion for music grew day by day with him always wanting to listen to and make good music,
hence his involvement in the industry.

He started music professionally by being a back-up
artiste for Tolucci who happens to be his mentor as
well as the owner of Koinonia Entertainment.

Tolulope Isaac sings a wide fusion of music genres
and brings them together under his self-titled
genre of Appreciative music. His music shows the
audience the African side of hip-hop (Afro-Pop).

Tolulope Isaac has 3 singles to his credit, they
include; Jaburata which was released in 2013 and
produced by Lc Beatz, Thank you which was
released in 2015 was a song inspired by the need
to appreciate God for his life.

His latest release is titled O’DAYO (It’s turned to
Joy), in which he he featured Lc Beatz. This song
was inspired by the Joy and happiness he has
experienced so far especially concerning his
family. The amazing fusion of African Hip Hop
Dance tune has an electric effect on the listener such that it is practically impossible to keep still and
not do the simplest imitation of dancing while
listening to the music. In effect, these Afro Pop
Dance tune will make you dance away your
worries.