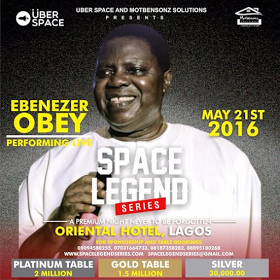 Nigeria’s highlife legend/Gospel Artiste ,Ebenezer Obey is fully
prepared to give his best at the Space Legend
Series Concert. He made this known at the Press
Parley for the Space Legend Series Concert coming
up on May 21st. He has promised  his fans to get
ready for an unforgettable spectacular performance at the event.

Expressing his joy at performing alongside the
duo of  Onyeka Onwenu and KSA after a longtime,
he said:

“I want to appreciate the organizers of this
event for coming up with such a great idea.
Concerts like this should hold at least three
times in a year as a way of recognizing
music pioneers like me” . He also saluted
the young and coming musicians for the great work they have all put up by putting
the  music Industry on the international
scene.

The CEO of Motbensonz Solutions; Omotoye
Benson  , one of the organizers made it known  to
press men at the conference that Orlando Julius
will also be joining the trio for a special
appearance. He also added that the Iyawo mi
crooner,Timi Dakolo will be the opening act for the show. Music lovers are guaranteed a timeless
entertainment fiesta.

The event is slated for Saturday May 21st at the
Oriental Hotel Lagos and it’s aimed at providing
premium experience and class entertainment to
the High Networth Individual, Accomplished
Personalities and Captains of Industries