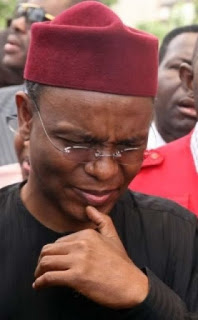 According to the Pastor , who is the General
Overseer of Christ Evangelical Intercessory
Fellowship Ministry Church, ,proposing such
law without considering what the religious
books say about preaching and what the
constitution says about freedom of worship and religion is unfair .

Addressing a group of Journalists at the
Nigeria Union of Journalists Secretariat
today , Pastor Buru said he has always
believed in Governor El-Rufai’s ability to lead
and better the lots of the citizens in the state,
but to delve into sensitive religious issue at a time when Nigerians are facing difficult
times is most disturbing .

He stressed, ” I want the governor to know
that most crises especially in the state and
other parts of the north usually start with
ethnicity, tribal and political ,but ends up in
religion crisis and if this bill is aimed at
containing preaching and other related religious activities , I fear the outcome.”

He however, suggested that since issues
such as this sensitive in nature , El-Rufai
should allow religious leaders sit down and
dialogue on the issue and come with
position paper on best ways to resolve the
controversies trailing the religious bill.

” We respect him as our political leader and
as our governor, but let him revisit that
decision and hand over the issue to CAN ,
JNI and other stakeholders for further
discussion. ” He said .

On the issue planned demolition of Gbagyi
Villa ,where his church is located , Pastor
Buru urged Governor El-Rufai to consider
the physical and psychological damages the
demolition will cause if it is eventually
carried out as planned .

“The people there did not just encroached
the lands there, we are not looking for
sympathy, we are not going to begging him
for sympathy, but we are only asking for
understanding. The demolition exercise
carried out in Zaria has already dented the image of El-Rufai’s government and
demolition Gbagyi Villa will further worsen
the situation ” Buru stated.

He further said it is wrong for a government
to demolish houses at Gbagyi Villa , when
owners of such houses acquired the land
legally .

“I have the permit and many of us have the
permit, because any paper that comes from
the government ,we believe it.So,let him
temper justice with mercy, but let him not
allow God to fight him that is our fear
,because he is in particular touching the house of God. ” He added.