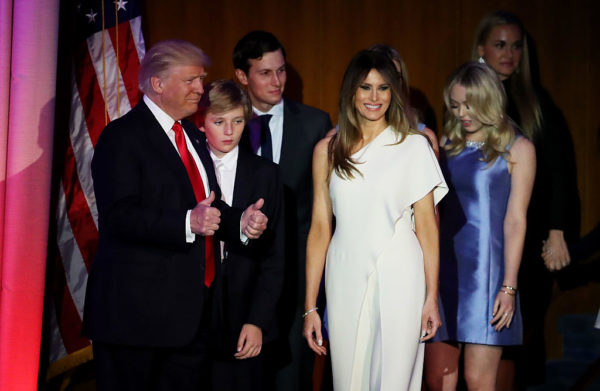 Donald Trump has gotten on stage to deliver his victory speech but the crowd won’t let Trump speak, as they are chanting, USA!

“Sorry to keep you waiting, complicated business,” Trump says. “Thank you very much.”

“I just received a call from secretary Clinton. She congratulated us, it’s about us, on our victory, and I congratulated her and her family on a very very hard fought campaign. She fought it very well. Hillary has worked very long and very hard over a long period of time, and we owe her a major debt of gratitude to our country. Now it’s time for America to bind the wounds of division… I says it is time for us to come together as one united people. I pledge to every citizen of our land that I will be president for all Americans, and this is so important for me. For those who have chosen not to support me… I’m reaching out to you for your guidance and your help so that we can work together to unify our great country. Working together, we will begin the urgent task of rebuilding our nation. I’ve gotten to know our country so well. Tremendous potential… every single American will have the ability to realize his or her potential… We are going to fix our inner cities… we’re gonna rebuild our infrastructure, which will become by the way second to none. And we’re going to put millions of people to work as we rebuild it. We will finally take care of our great veterans.”

Talking about other countries, he says:

We will double our growth and have the strongest economy in the world. At the same time, we will get along with all other nations willing to get along with us. America will no longer settle for anything less than the best. We must reclaim our country’s destiny, and dream big, and bold and daring. I want to tell the world community that while we will always put America’s interests first, we will deal fairly with everyone. And now, I’d like to take this moment to thank some of the people who really helped me.”

He thanks his parents. His sisters and brother. His late brother.