Enough Of These Lies By Lai Mohammed – CAN 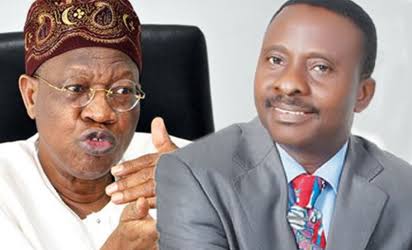 The Christian Association of Nigeria (CAN) says Lai Mohammed, minister of information, never dares to speak against Muslim leaders who make hate speeches, but that he comes after those of the church.

The association was reacting to a statement in which the minister said reports of the killing of Christians were not true.

“Such fallacies like the Islamisation of Nigeria, the killing of Christians by Muslims, the labelling of Nigeria as the most dangerous place for Christians in the world can only serve one purpose: trigger a religious war. Needless to say that no nation ever survives a religious war,” Mohammed had said.

“The alleged Islamisation of Nigeria under the current administration is totally false and should be perceived in its entirety as a campaign of calumny. The secular nature of Nigeria’s constitution makes the issue of religious dominance and impunity improbable.”

In a statement issued by Adebayo Oladeji, media aide of Samson Ayokunle, CAN president, the association described the minister’s statement as lies.

“We are disappointed but not surprised with the disparaging, lies and abusive statements credited to the minister of information, Alhaji Lai Mohammed in Ilorin during the town hall meeting where he was accusing religious leaders of making alleged provocative statements that can lead to religious war,” it said.

“Mohammed in his characteristic manner left out the issues but went after the so-called religious leaders, which we all know, are the Christian leaders because we know that the minister dare not speak against the Muslim leaders who had said worse things.”

CAN said that “Nigerian Christians love their country and they not only promote peace and unity but also always pray for her and the leadership”.

It said, in the past one year, it declared fasting and prayers for Nigeria and her leadership twice.

“If we are thirsty for a war, we wouldn’t have gone that far,” the Christian body said.

It asked Mohammed to disprove its claim that its members were killed by Fulani herdsmen in Kaduna, Benue and Plateau states.

“That those who killed Madam Bridget Agbahime in Kano were Muslims who were arrested but later discharged and acquitted by the court as requested by the state attorney-general and commissioner of justice?

“That those who killed Madam Eunice Elisha Olawale while doing the morning preaching in Kubwa, Abuja were Muslim fundamentalists who were arrested but also freed by the police? Is Lai Mohammed telling us that no Christian was killed by the Fulani herdsmen who invaded southern Kaduna, killed and maimed our members and razed down their communities recently? Is Mohammed saying the Fulani herdsmen who have been killing our members are not armed with sophisticated weapons and is it wrong for us to ask where they get the AK-47 and other weapons they are using?

“When all those killings were going on in Plateau, Benue and Southern Kaduna, was there any time Lai Mohammed or anyone in the federal government raised up a voice against the atrocities?

“If those murderous Fulani herdsmen are faceless, how come the Sultan of Sokoto is claiming that they are not Nigerians and in another instance, the Kaduna state governor, Mallam Nasir el-Rufai said they had been paid for the ‘wrong done to them’? Why is it that whenever these murderers are perpetrating their atrocities, the security agencies look elsewhere until their victims decided to fight back? Is it because the security agencies are Muslim dominated? CAN says no to disparaging remarks in the name of politics. Enough of these lies by Lai Mohammed.”