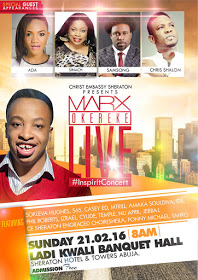 Following the new release of his debut album
singer, songwriter & recording artiste, Marx Okereke will be LIVE in concert come February, 21st at Christ Embassy Sheraton, Sheraton Hotel & Towers Abuja. Shortly after the release of his debut album titled “InSpirit” the singing sensation who’s also a media personality embarks on a promotional activity for
the album beginning with a radio tour across the
country majorly in Lagos and Abuja. The concert
which is hash-tagged #InSpiritConcert named after his debut album will witness beautiful
performances from the album as well.