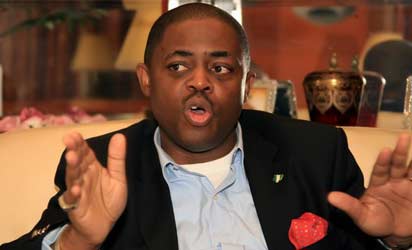 Fani-Kayode in a statement, on Thursday,
signed by Jude Ndukwe, his Special Assistant
on Media, said that the purported ‘message
was part of a long and systematic plot by
mischief makers, his traducers and detractors
to continue to discredit and malign his person and character, and cause disaffection among
his friends, associates and supporters.’

‘RE: FEMI-FANI-KAYODE SENDS MESSAGE TO ALL
CHRISTIANS AND APOSTLE SULEIMAN FROM
DETENTION
This is to inform the general public that the
purported message making the rounds that
Chief Femi Fani-Kayode wrote a certain message to Christians and Apostle Suleiman
from detention is not true. That message was
part of a long and systematic plot by mischief
makers, his traducers and detractors to
continue to discredit and malign his person
and character, and cause disaffection among his friends, associates and supporters. We
therefore urge members of the public to
disregard that message and treat it as non-
existent.’

‘God willing am in custody of EFCC. But to me is
a great time to commune with God just the way
Paul and other brethren did in their days.

I am here not only because my party gave me
money to campaign for them like every other
politician even in APC. But if it might interest
you to know,what is going on is the
persecution of Christians. Before i forget,this
message should be taken to apostle Johnson Suleman the founder of OMEGA fire ministry. I
had a revelation that they are planing to attack
him. Because he is one of the major voice
crying out for justice in the body of Christ.

The Muslims are out to persecute the
Christians.

I am here under custody because the likes of
Kabiru are not comfortable with my position as
a Christian.

God willing,the dark age will soon be over.

They refused taking me to court to defend my
civic right.

They want to keep me for the next 4years. But
they don’t know it is dangerous. I now have
time to pray more, study more, and even
meditate.

Before my arrest, Lai Mohammed offered me an
amnesty if only i decamp to their anti-Christ
party.

I refused because i know who i am.

No man can cover your sin for you. If am
guilty,i will surly come out strong.

This is not just anti-corruption fight. Where are
the PDP governors and leaders from the
North? They are walking freely today.

This is a fight to pocket the voices of Christians.

A situation where an office picked offence on
me for relating with my God through the name
Jesus. He threw my bible to the floor today.

If it where to be the Quran,will he do that?

The head of who did that would’ve been at the
gate of Aso rock by now.

So many secret plots to eliminate top politicians
and pastors who are Christians is on going.

Tukur was right when he raised alarm that,a
meeting was held in Dubai to overthrow
Jonathan by all means. Part of what they
discussed at the meeting,is what Aregbeshola
and El-Rufai are displaying in their various
states.

I am not an infidel and i will never be one. I am
a man of dignity. I will not stop fighting even
here in prison.

I am the John the Baptist of my generation.

I will not keep mute and watch anti-Christ
imposing policies that are not religious
friendly.

What has bible got to do with my case with the
EFCC?

Why are they keeping me here when we have
a competent court to prove if am guilty or not?

I am blowing the whistle now for Christians to
go on their knees. This was how i warned my
brothers against Sheriff whose mission is to
destroy the PDP and give room for Buhari to
install one party system.

We gave them opportunity to be opposition.

Why are they depriving us such right if they
don’t have interior motive.
A democratic system without vibrant
opposition is said to be dictatorship
government.

God willing,i will be alive to witness Nigerians
glamouring for referendum like what took
place in great Britain.

And such referendum will tell if we truly saw
the future under president Buhari’s
government.
Arresting Kayode is the greatest achievement
they’ve achieved. But for me,God used them to
keep me here,in order to prepare for the challenges ahead.

Today is pregnant. Let’s see what tomorrow
will deliver.
They were not elected to be permanent. They
have maximum 8years to stay. And is already
counting.
Thank you all for your prayers
. –Femi Fani-Kayode’