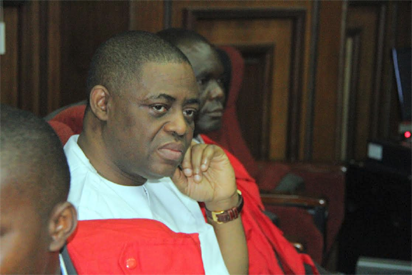 Former Aviation Minister, Spokesperson to ex- President Goodluck Jonathan’s presidential campaign Organisation, Chief Femi Fani-Kayode has backed the call by Sam Omatseye, Chairman, Editorial Board, The Nation that Christens Association of Nigeria (CAN) should use tithes to buy arms for Christians for self defence.

The Christian Association of Nigeria (CAN) has said in November that 102 Christians were killed, over 50,000 houses burnt while another 215 were injured since May 2016 by suspected Fulani herdsmen in 25 villages in Kaduna state.

CAN said the villages include Godogodo, Gidan Waya and Ninte communities in Jema’a local government area of the state.

Fano-Kayode in his tweet said that ‘those that take pleasure in mass murder and carnage must be stopped. Enough is enough’ as his begged CAN to help stop the killings.

Omatseye, Thursday, on his twitter handle @samomatseye had tweeted ‘102 killed and 500000 houses razed in southern Kaduna. Isn’t it time for CAN to use its tithes to buy arms for Christians for self defense?’

Fani- Kayode
‘Same happened when govt didn’t defend Itsekiris against Ijaws, they armed themselves and ended the war. It’s called balance of terror’

‘Those attacking me don’t know English. I only called for self-defence. If no one attacks them then there will be peace. FG should do its job’

And today he tweeted ‘Southern Kaduna youths have threatened self defense if neglect continues. Is anyone listening?’

Fani-Kayode backing the call by Omatseye tweeted that ‘I support @samomatseye’s call on Xtians in southern Kaduna to defend themselves from genocide and his appeal to CAN to help them.’

‘Self-defence, like self-determination, is a right. Those that take pleasure in mass murder and carnage must be stopped. Enough is enough.’ 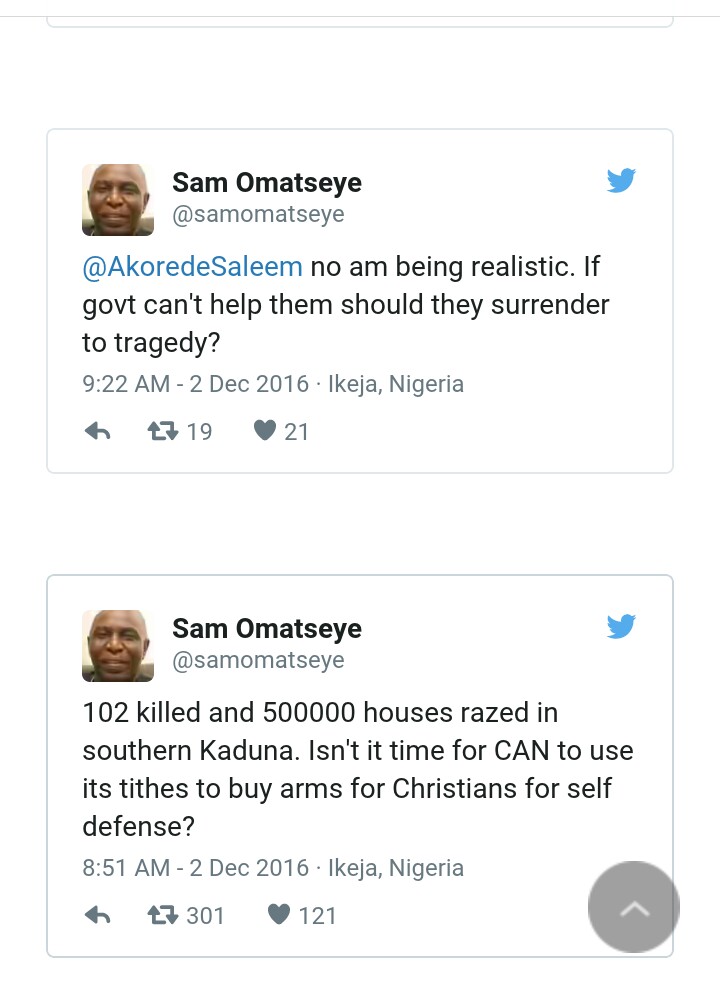 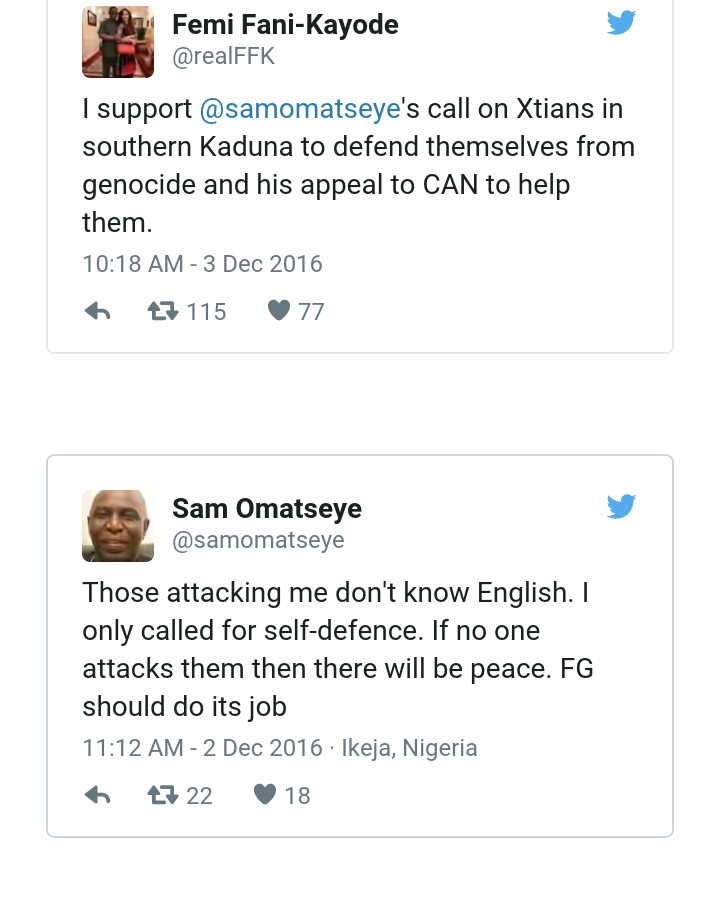 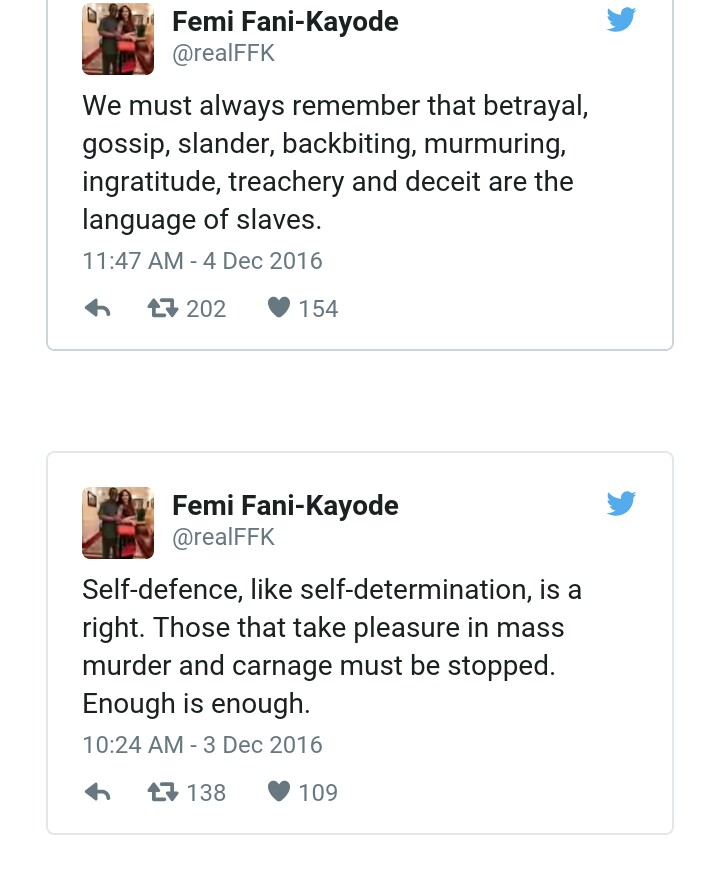 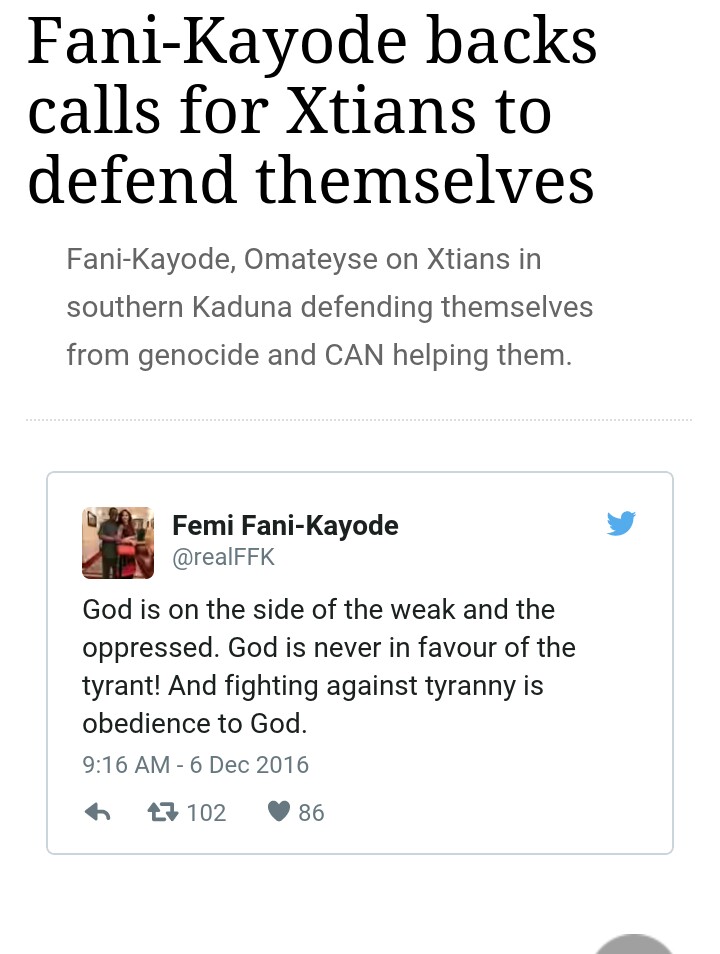