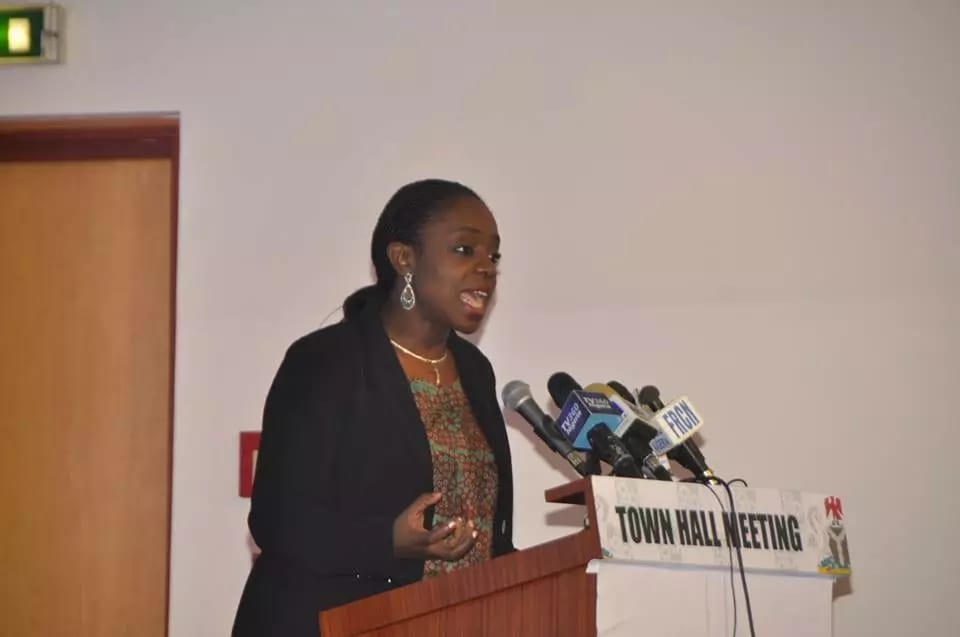 The Nigerian economy is gradually taking a
downward hill

– The government has resulted to borrowing to
fund the 2016 budget

The federal government has informed Nigerians
that it will result to borrowing to fund the 2016
budget due to the declining price of oil in the
international market.

Nigeria is largely dependent on proceeds from oil
to fund the budget but the resurgence of militancy
in the oil rich Niger-Delta region has reduced oil
production.

Minister of finance, Mrs Kemi Adeosun told a packed
crowd of Nigerians at the Shehu Musa Yar’adua
Center in the country’s capital, Abuja today, August
9, that the government has no choice but to
borrow.

”We have to borrow to implement on the projects
we are embarking on,we cannot wait for oil to
improve,” Adeosun submitted.

The event tagged Town Hall Meeting/Policy Dialogue for Good Governance was organised by the Alumni Association of the National Institute
(AANI).

Adeosun further painted a picture of gloom saying
that the government cannot afford to be wasteful in
these times.

He words: ”We cannot afford to waste money. The
money we have is limited hence we must spend
wisely. We must change because the direction we
are heading is not sustainable.”

Adeosun’s revelation is coming on a day the
Nigerian naira traded at an all-time low of 350 to
the dollar today, August 9 in a single interbank
market trade of $100,000. Shumaka

” after months of insisting that the economy was doing well.

The Central Bank of Nigeria (CBN) governor,
Godwin Emefiele set the ball rolling on Wednesday, July 20 during a presentation to the Senate.

A seemingly sober Emiefiele told the senators that
the country’s economy has been characterised by
external shocks, sharp decline in commodity prices
and geo-political tensions along important global
trading routes among others.

Meanwhile, renowned economist and
businessman, Mr Atedo Peterside has warned that
the recession currently experienced in Nigeria will
last for a long time.

In a tweet via his Twitter handle earlier today, the
President & Founder of Anap Foundation said
business confidence is low and investors are
holding back on investing in Africa’s most
populated country.

a day before Yesterday, August 8, the media was awash with
stories that the Nigerian government was in the
process of appointing two lead managers and a
financial adviser to organize the issuance of $1 billion of Eurobonds this year.

According to the Debt Management Office (DMO),
the sale is the first tranche of a $4.5 billion Nigeria
Global Medium-Term Notes Issuance Programme
that runs through 2018.

In a related development, fourteen (14) airlines have withdrawn their services from Nigeria due to low patronage and the bad economy being
experienced in the country.

The airlines are among the 50 that operated the
Nigerian routes some months ago. Some of those
listed are Spanish-owned Iberia airlines, United
Airlines and Air Gambia among others.