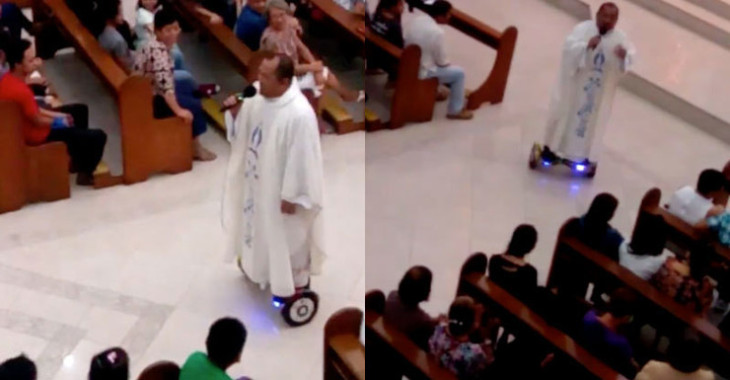 A priest in the Philippines has been suspended for
riding a hoverboard during Christmas Vigil Mass.

The priest rode the self-balancing scooter – a small
platform between two wheels – up and down the
aisles of the church in the diocese of San Pablo
before the final blessing of the Mass, while singing a
Christmas song.

The battery-powered hoverboard, nicknamed a
“swegway”, is similar to a Segway, but without a
handle. A film on YouTube shows the priest
keeping perfect balance for over a minute as he
sang to the congregation, sometimes turning on
the spot.

The priest, who has not been named, was
suspended from all duties in the parish.

In a statement the diocese said that his action, “a
way of greeting his parishioners”, was “wrong”.

“The Eucharist demands utmost respect and
reverence. It is the Memorial of the Lord’s Sacrifice.
It is the source and summit of Christian life. It is the
Church’s highest form of worship.

“Consequently, it is not a personal celebration
where one can capriciously introduce something to
get the attention of the people

“The priest said that it was a wake-up call for him;
he acknowledged that his action was not right and
promised that it will not happen again.

“He will be out of the parish and will spend some
time to reflect on this past event.

Priest says the suspension is ‘a wake-up call for
him’

While some comments on social media have been
critical of the priest’s behaviour, others have seen
nothing wrong with it.