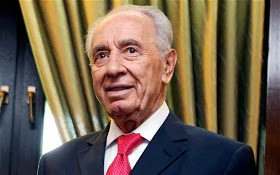 Former Israeli president Shimon Peres has died.
One of the last of a generation of Israeli politicians
present at the new nation’s birth in 1948, Shimon
Peres died today, two weeks after suffering a
major stroke. According to Peres’ doctor Rafi
Walden, the 93-year-old died in his sleep at around 3:00am

Our father’s legacy has always been thefuture. Look to tomorrow, he taught us.
Today, we sense that the entire nation of Israel and the global community mourns
this great loss. We share this pain together.

Shimon Peres won the Nobel Peace prize in 1994
for his role in negotiating peace accords with the
Palestinians a year earlier. He served in 12governments, including once as president and
twice as prime minister