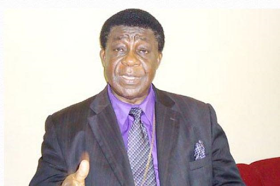 Archbishop George Amu, former Secretary of the Christian Association of Nigeria (CAN) has revealed that Africa’s richest man, Aliko Dangote will be Nigeria’s  president one day. He said the the emergence of Dangote as Nigeria’s president will shock the world as much Trump did.
According to him, the similarities of Trump and Dangote is that they are both successful business men and this is why God want to use them to save their country respectively.

The Archbishop recalled speaking to journalists during his 75th birthday celebration about the victory of Trump. He said God revealed to him that Trump would win the election and has in the same manner revealed that Dangote would be Nigeria’s president but he is not sure if he would succeed Buhari.

He said no newspaper carried his prediction about Trump’s win and he asked his children to post the revelation on Facebook but they refused. He added:

“I even told my children to circulate the information on their Facebook but they declined. The same God, who revealed Donald Trump’s victory in the US, has also declared His intention to install Dangote as the future President of Nigeria.”