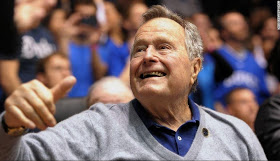 According to the Houston Chronicle and Houston TV station, former US president George H.W. Bush has been hospitalized. Bush’s chief of staff, Jean Becker, says he was admitted to Houston Methodist Hospital after falling ill but he’s “doing fine.”

Bush, who served a single-term as President from 1988 to 1992, was not expected to attend the inauguration of the 45th President, Donald J. Trump, in Washington on Friday due to health concerns.

Several bouts with illness have kept the 92-year-old out of the spotlight in recent years and he has rarely made public remarks.

Bush revealed several years ago that he suffered from a form of Parkinson’s disease that left him unable to walk.

He uses a wheelchair or a scooter to get around and had two other health scares in 2014 and 2015.