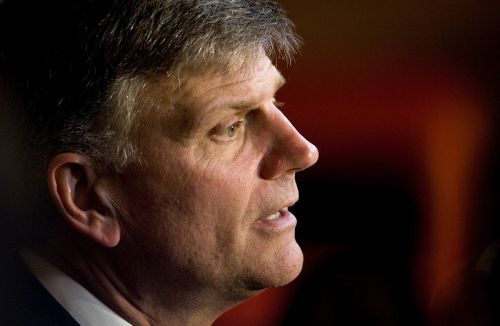 Evangelist Franklin Graham said allowing tens of
thousands of Muslim refugees into the United
States, as President Barack Obama wants, could
mean attacks on Christians in the country just as
they are being targeted elsewhere, pointing to the
killing of a Christian priest in Normandy, France, last week.

“President Barack Obama, Hillary Clinton, and some
other politicians want to allow tens of thousands of
Muslim refugees into this country. A few days ago
two Muslim men went into a Catholic Church in
France in the name of ISIS and brutally slit the
throat of an 85-year-old priest,” Graham, president of Samaritan’s Purse and Billy Graham Evangelistic
Association, wrote in a Facebook post. https://www.facebook.com/FranklinGraham/

“The self-proclaimed ISIS soldiers shouted ‘Allahu
Akbar’ as they ran from the church,” Graham
pointed out, adding, “Unless something is done, it’s
just a matter of time before we see this happen here
in the United States.”

Hamel’s parish, the Church of the Gambetta in the
French town of Saint-Etienne-du-Rouvray, had
donated land to Muslims to build a mosque, a
senior Catholic cleric said last week, days after the priest was killed July 26 by supporters of the
Islamic State terror group, also known as ISIS, ISIL
or Daesh and which operates from Iraq and Syria.

In his Facebook post, Graham included a link to an
article published in New York Post, titled “We have
failed to protect Christians from Islamic terror.”

“Our tolerance for Islam’s intolerance is the greatest
weapon these blood-cult terrorists have,” the article states.

Despite severe attacks in Syria, the author writes,
“President Obama refused to acknowledge the
torture, rape, kidnapping, enslavement and mass
murder of Christians at the hands of Islamist
fanatics (and not just ISIS),” and adds, “When
alarmed voices raised the prospect of giving priority to Christian refugees, the administration
cried, ‘Bigotry!’ — and gave priority to Muslim
migrants.”

The author adds: “In the name of tolerance, we’ve
allowed foreign-funded hate mosques to tyrannize
our Muslim fellow citizens. Citing religious freedom,
we won’t even eavesdrop on incitements to murder
or prevent rabid foreign institutions from sending
militant mullahs to bully Muslim communities in the West.”

The French priest’s killers were identified as 19-
year-old Adel Kermiche from Northern France and
Abdel-Malik Nabil Petitjean, also 19, from Eastern
France. They were shot and killed by authorities as
they exited the church after murdering the priest.

The Christian Post earlier reported that the Church of the Gambetta was found on an ISIS hit list from
2015. ISIS claimed responsibility for the attack by
releasing a video purporting to show the two
teenagers pledging their allegiance to the jihadists.

The Sunni terror group has been losing territory in
Iraq and Syria, and some have posed that to be a
reason behind increased attacks in other parts of
the world. Such attacks, they claim, help ISIS to
falsely portray its strength and the spread of its
ideology as well as create divisions and thereby gain more recruits.