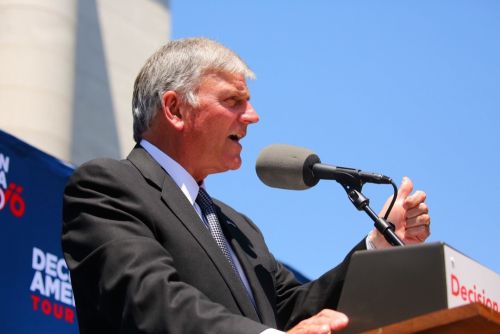 Leading evangelist Rev. Franklin Graham is
denying a rumor that he told hundreds of
evangelical leaders who met with Donald
Trump on Tuesday anything along the lines
that the billionaire real estate mogul is a better
option for president than presumptive Democratic nominee Hillary Clinton.

Following Trump’s “conversation” with over
900 evangelical leaders in New York City,
conservative Bishop E.W. Jackson of Virginia,
who attended the closed-door meeting, told
listeners on a conference call that Graham had
implied that Trump provided more “hope” than Clinton. Jackson told The Christian Post in a follow-up interview that Graham did not go as
far as to endorse Trump but suggested that
Trump is a better alternative.

As Graham is touring all 50 state capitals this
year to hold prayer rallies to encourage
Christians to get involved in the political
process, he has been adamant that he will not
be endorsing any presidential candidates.

After reaching out to Graham for comment on
Tuesday, he clarified to CP on Wednesday that
he did not give a long address to the crowd but
simply gave a short prayer. Although he
offered about one minute of remarks, they did
not include anything along the lines that Trump is preferred over Clinton.

According to a transcript from the event, Graham made no mention of Trump or Clinton.

Additionally, some contention was made over a
suggestion that Graham had compared biblical
leaders like Moses and David to Trump.
However, Graham merely pointed out that the
flaws and sins of biblical leaders like Moses,
David and Abraham proves that no one is perfect.

“All of this to say, there is none of us is perfect.
We’re all guilty of sin. Franklin Graham stands
here in front of you today as a sinner. But I’ve
been forgiven by God’s grace. He forgave me. I
invited Christ to come into my heart and my life.
He forgave me,” Graham said, according to the Yahoo transcript. “There’s no perfect person —
there’s only one, and that’s the Lord Jesus
Christ. And he’s not running for president of
the United States. This year.”

Larry Tomczak, an author, cultural
commentator and Christian Post op-ed
contributor, attended the meeting and told CP
that Graham was not there to endorse Trump
but merely set the spiritual tone for the
morning.

“I felt that [Graham], as well as others, were
trying to nurture an atmosphere or set a tone
that this is not a political rally, this is not an
endorsement session, this is not a debate,”
Tomczak said. “This is an opportunity to
converse — an open forum for a man who is going to be the Republican nominee for
president. That’s what he did. He really set it up
beautifully.”

In an interview with CP on Thursday, Jackson
clarified what it was that made him come away
from the meeting thinking that Graham was
encouraging Christians to consider Trump over
Clinton.

“Part of it was he showed up at an event that
was a ‘conversation with Donald Trump,'”
Jackson said. “That’s part of it, but the context
itself when he was talking about
understanding that we all have sinned and
fallen short of the glory of God and that there is no such thing as a perfect candidate. I don’t
think he was there considering Hillary Clinton.”

Jackson added that Graham did not say
anything like “you ought to support Donald
Trump or vote for Donald Trump.”

“I walked away with the understanding that he
was saying, ‘Do not allow your assessment of
Donald Trump’s Christianity from stopping you
from considering him seriously,’ given the fact
that there is no perfect [person], we all have
sinned and fallen short of the glory of God, and so forth,” Jackson said. “You take his remarks
are not directed toward Hillary Clinton but
rather toward Donald Trump in considering
him as a candidate.”

Although Graham offered no inclination of an
endorsement, he told Fox News’ Greta Van
Susteren that he was “glad” that he went to the
meeting with Trump.

“I was asked to come to a meeting and hear
Donald Trump and I am glad I did. As you
know, I am not supporting or endorsing
anyone this year,” Graham said.

“I was invited to hear him and I am glad I did
because I think he answered everyone’s
questions,” Graham added. “People had good
concerns, honest concerns and I think Donald
Trump answered those today.”