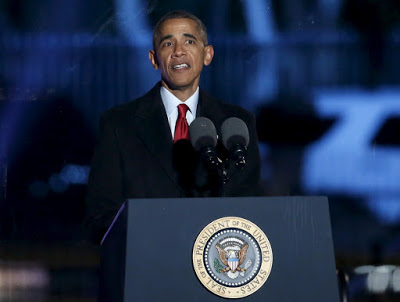 U.S. President Barack Obama speaks during the National Christmas Tree Lighting and Pageant of Peace ceremony on the Ellipse near the White House in Washington, December 3, 2015

Obama had said in a statement through the White House on Christmas Day that Christians are suffering greatly due to the ongoing violence and wars in the Middle East.

“We join with people around the world in praying for God’s protection for persecuted Christians and those of other faiths, as well as for those brave men and women engaged in our military, diplomatic, and humanitarian efforts to alleviate their suffering and restore stability, security, and hope to their nations,” the president declared last week.

“In some areas of the Middle East where church bells have rung for centuries on Christmas Day, this year they will be silent; this silence bears tragic witness to the brutal atrocities committed against these communities by ISIL,” he added, using another name for IS.

The terror group has been
persecuting Christians and other religious minorities throughout the territory it has captured in Iraq and Syria.
While the United States has joined forces with several Western and Arab powers in conducting airstrikes against terror targets in Syria, Graham has often criticized the president for not putting a greater emphasis on the suffering that Christians are going through.

Back in October following the mass shootings in Umpqua, Oregon, which left 10 people dead, and in which Christians were reportedly targeted, Graham said: “I don’t understand the president. Christians were martyred! They were asked specifically, ‘Are you a Christian?’ And if they said ‘yes,’ he said, ‘You’re getting ready to meet your God now in one second,’ and he pulled the trigger.”

The Evangelical leader added: “So Christians are martyred. And we’re seeing that not only in the Middle East, but we’re beginning to see it here in the United States, and the president is silent.”

“Beatings, beheadings, crucifixions, and other atrocities are commonplace as Islam tries to exterminate Christians within their reach and expand their territories. These aren’t just numbers and places in the news — they’re real people

and they are suffering,” he continued. “Some places in the Middle East where Christianity has its roots — where Abraham, Moses, the Apostles, and even Jesus Christ walked centuries
ago — Christians are virtually extinct this Christmas.”

Other famous world figures, including Britain’s Prince Charles, have also warned that Christians are on the brink of disappearing from the Middle East, due the rising levels of persecution.

“Their suffering is symptomatic of a very real crisis which threatens the very existence of Christianity in the land of its birth,” Charles said earlier in December.

“In fact, according to Aid to the Church in Need, which is a truly remarkable organization, Christianity is on course to disappear from Iraq within five years unless emergency help is provided on a greatly increased scale at an international level,” he added, calling the spiritual and cultural survival of Christianity in the Middle East “the greatest challenge” that the world faces