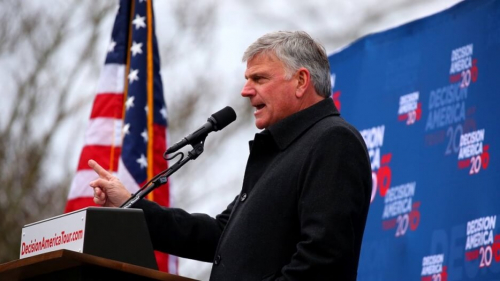 “Maybe TIME should check their Bible. I find that a very interesting parallel. Moses led the children of Israel to wander around in the wilderness for 40 years,” he said.

“I wonder if TIME was saying that if Hillary Clinton were elected, she would have led us into a wilderness that would’ve taken us 40 years — or more — to find our way out of?” Graham questioned. “The socialist agenda that she and the progressives had outlined for this country would’ve taken America at least that long to recover from — if ever!”

Graham’s comments are in reference to a Time magazine article on Clinton, Trump’s defeated challenger in the 2016 presidential election, who lost the all-important Electoral College, but won the popular vote.

Time magazine noted that Clinton came close to becoming America’s first-ever female president. But in the end, she lost.

“She’s the woman who was almost president, she is what might have been and what will yet be,” the magazine wrote. “Like an American Moses, she was an imperfect prophet, leading women to the edge of the Promised Land. Now it’s up to another woman to enter it.”

Meanwhile, Trump has called the magazine’s decision to name him person of the year “a tremendous honor,” and said that it “means a lot,” though as Fox News pointed out, much of the article described the president-elect in “backhanded compliments.”

“For instance, while the piece said he ‘did what no American politician had attempted in a generation,’ it added that he ‘magnified the divisions of the present, inspiring new levels of anger and fear within his country,'” Fox noted.

Still, the article concluded that Trump’s victory gives many Americans who “felt powerless” a “new champion.”

“It’s an America of renewed hope and paralyzing fear, a country few expected less than a year ago. Because of Donald John Trump, whatever happens next, it will never be like it was before,” the magazine wrote.