Franklin Graham Tells Terrorist Who Killed Christian On Easter: ‘Every Knee Will Bow To Jesus’ 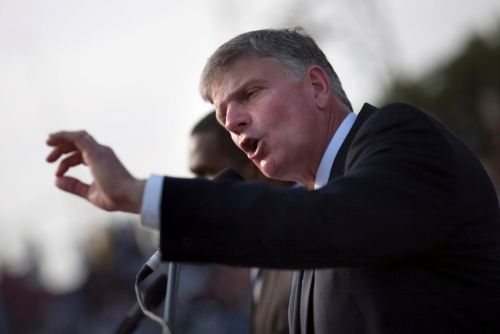 The Rev. Franklin Graham is responding to the
news that Islamic terrorists killed 70 Pakistani
Christians, mostly women and children, on
Easter Sunday in Lahore by stating that the
world will not bow down to Islam; but instead
“every knee” will bow to Jesus.

“As Christians we know that when death
comes to someone who has trusted Jesus
Christ as their Lord and Savior, we are ushered
into the presence of our Heavenly Father and
will live for eternity in His presence. The grave
has no hold on the believer,” Graham said in a Facebook message.

Graham, who leads the Billy Graham
Evangelistic Association, noted that Islamic
terrorists have taken responsibility for the suicide bomb attack, with the Jamaat-ul-Ahrar
group, which splintered from the Taliban,
revealing that it specifically targeted Christians.

“Muslims want Shariah law. They want the
whole world to bow to Islam — that won’t
happen. The Word of God tells us that one day
‘at the name of Jesus every knee should bow,
in Heaven and on Earth and under the Earth,
and every tongue confess that Jesus Christ is Lord, to the glory of God the
Father’ (Philippians 2:10-11). I serve a risen
Savior,” Graham declared.

Pope Francis has also spoken out against the
attack, stating that the massacre of Christians
was “reprehensible” and that it had “bloodied”
Easter, Vatican Radio reports. “I wish to express my closeness to all those affected by
this cowardly and senseless crime, and ask you
to pray to the Lord for the numerous victims
and their loved ones.”

“I appeal to the civil authorities and to all the
social components of [Pakistan] to do
everything possible to restore security and
peace to the population and, in particular, to
the most vulnerable religious minorities,”
Francis added.

The Roman Catholic Church leader warned that
“violence and murderous hatred” only leads to
pain and destruction, arguing that respect and
fraternity is the only way to achieve peace.

“The Passover of the Lord inspires in us, in an
even more powerful way, prayers to God so
that he stops the hands of the violent, who
spread terror and death; and makes it possible
for love, justice and reconciliation to reign in
the world,” Francis said.

Persecution watchdog groups, such as Open
Doors USA, have said the Easter terror attack is
only one example of the escalating global
persecution against followers of Christ.

“Each life lost is precious. I’m disappointed that
the Western world only seems to pay close
attention when attacks happen here in the
West. The lives lost in Africa, the Middle East or
Southeast Asia are just as valuable as those lost
in Europe or the United States. We should be equally outraged by their loss,” said Open
Doors USA President and CEO David Curry.

“Countering the kind of terrorism we saw
today in Pakistan will take strong leadership
and skilled diplomacy from the United States
with other like-minded nations. Together, we
must speak out against religious persecution
wherever it may be found,” Curry added.

“Our resolve as a nation and as a government
is getting stronger and the cowardly enemy is
trying for soft targets,” Sharif said at a security
meeting after the bombing.