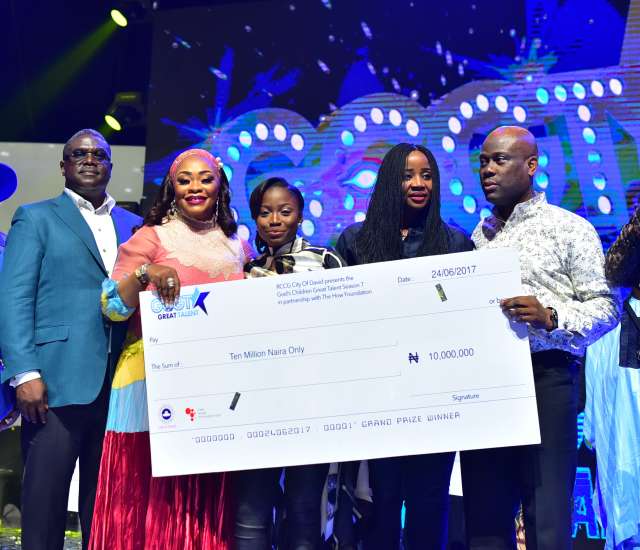 A fans’ favorite, Esther has been a standout phenomenon on GCGT 7 since her very first performance and through the entire competition.

The winner’s prize was presented by Senior Pastor at City of David Parish, Pastor Idowu Iluyomade, Chairperson, GCGT Board of Trustees, Pastor (Mrs) Siju Iluyomade, Chief Executive Officer of Access Bank and Founder of The How Foundation, Dr. Herbert Wigwe

A fans’ favorite, Esther has been a standout phenomenon on GCGT 7 since her very first performance and through the entire competition. Now as this season’s winner, Esther Benyeogo’s career is about to take off with the GCGT team providing close guidance.

The two-hour live television broadcast on HIPTV, EbonyLife TV, Wazobia Max and Dove TV on Saturday night was the final performance of the season and last chance for the final ten contestants to enchant the judges and audience with their performances.

The winner’s selection was a combination of GCGT7 judges’ scores and audience votes for Esther Benyeogo to emerge victorious.

An emotional Esther was grateful for how far she has come giving all glory to God for being so faithful.

“The journey has been long. Weeks of practice and focus but in the end, it is has been a blessing to remain in God’s grace. I thank the Almighty God for helping me express my talent through GCGT and more importantly, making my light shine among thousands. Here I am, standing.” A cheerful Esther said.

The past weeks on God’s Children Great Talent have shown us raw talent refined into a skill, despair turned into hope with performances that blessed hearts. A representative of the City of David Parish Pastor (Mrs) Sola David-Borha revealed, “Together we have sung, danced, laughed and loved every moment of this season. We appreciate the support from The How Foundation, media partners, viewers and members of the production team for a successful season.”

This is a sponsored post by God’s Children Great Talent.