GoodNews: Thousands Of Muslims Converting To Christianity In Bangladesh Despite Rising Persecution 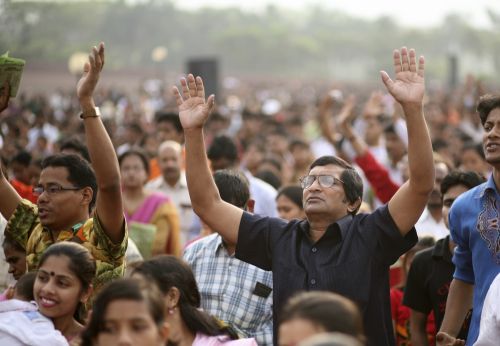 Even though persecution against Christians in
Bangladesh is on the rise, so is the number of
Muslims converting to Christianity in the south
Asian nation.

Just as in other countries where the population is
dominated by a Muslim majority government,
Christians in Bangladesh are at risk of being killed
or persecuted because of their faith in Jesus Christ.

But while nearly 90 percent of Bangladesh’s
population of 165 million people is Muslim,
Christianity is gaining traction.

According to the human rights organization Christian Freedom International, it is estimated that as many as 91,000 Muslims across Bangladesh
have converted to Christianity in the last six years,
even though apostasy in many Muslim cultures is
punishable by death.

Pastor Faruk al-Ahmed, a Christian convert from
Islam who has been preaching since the
mid-1990s, personally attested to the rise of
Christianity in his own community in Northern
Bangladesh during an interview with the British
news site Express.

“When I began my ministry in Kurigram, there was
only one traditional Christian family and one Muslim
background family,” the pastor explained. “Now, almost 1,500 believers from Muslim backgrounds
are glorifying God in this area.”

“Persecution will come more but the believers and I
are ready to face it,” al-Ahmed added.

The number of Christians in Bangladesh is
estimated at 1.6 million, which comprises around 1
percent of the country’s total population.

Despite reports that Christianity is growing in the
country, CFI emphasizes that Christians are forced
to keep their worship activities secretive to prevent
“retaliations” for their faith.

“Churches, especially house churches where
Muslim-background believers meet, prefer not to
display any Christian symbols in order to avoid
being recognised,” a report from the Christian persecution watchdog ministry Open Doors U.K.
states. “Sometimes, even historic or Mainline
churches face opposition and restrictions in putting
up a cross or other religious symbols.”

Open Doors, which ranks Bangladesh as the 35th worse country in the world when it comes to Christian persecution, reports that nine churches were forced to close in 2015 due to security concerns.

Although many Christians have been killed, beaten,
raped and tortured in Bangladesh because of their
faith, persecution against believers comes in many
different societal forms, according to Open Doors.

“Conversion is not forbidden by law, but pressure
to recant the Christian faith will be exerted by
family, friends and neighbors. There have been
several reports of Christians having to give up their
shops or businesses due to the pressure by the
Muslim majority,” the Open Doors report adds.

“Converts themselves are isolated from their family
frequently and registration of converts’ children is
problematical as in most cases they are
automatically registered as Muslims.”

Muslim radicals often have a level of impunity
because police in Bangladesh tend to turn a blind
eye to the persecution of religious minorities,
according to Christian Freedom International.

As the Islamic State and other extremist groups
have penetrated the nation and killed a number of
Christians and religious minorities in the last year,
about 2,000 Christians gathered in the Archdiocese
of Dhaka and the Diocese of Khulna in June to pray
simultaneously for “humanity to wake up” to the threat of terrorist violence in the country.

“Let us pray that this will become a country of unity,
peace and harmony,” Catholic Archbishop of Dhaka
Patrick D’Roazario was quoted by Christian Today as saying during the prayers.

“Let us pray that dormant humanity become aware
of the violence, murders committed in secret, and
the persecution,” he continued. “May Almighty God
bless [the terrorists] so that they change their
minds.”