Google For Nigeria: Here Are 14 Things That Happened At Tech Giants’ Big Event In Lagos 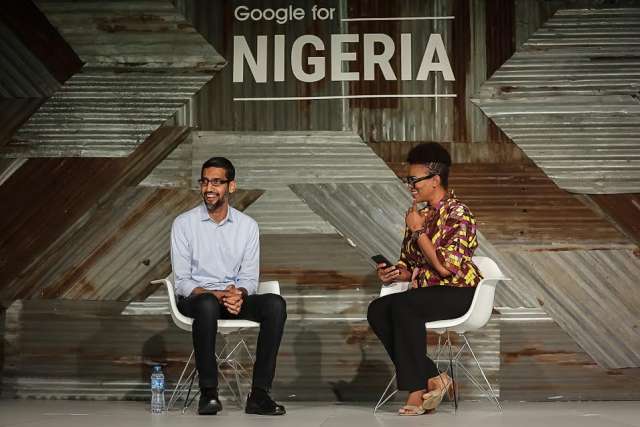 The Google For Nigeria event has been holding all week at the Landmark Event Center, Victoria Island, Lagos and one of the bigger surprises of the event was an appearance by Google’s global CEO, Sundar Pichai.

But that is not the only interesting thing that went down at Google For Nigeria — there were a lot of Nigeria specific announcements. Here are all 14 of them:

1. Caesar Sengupta, Head of Google’s Next Billion Users Initiative announced an Android One device called the Freetell ICE 2 and it will be coming in September. It will cost N13,000 with a special data bundle from MTN.

3. Tamar Yehoshua (VP product management, Google Search) announced that the three popular searches in Nigeria over the past year have been “Naira,” “Runtown — Mad over You,” and “Anthony Joshua.”

4. Yehoshua also announced a new feature called “Posts On Google” which lets musicians post udpates and media directly on Google so fans can access it.


5. Nigeria is the third country Post On Google is being launched after the US and Brazil.

6. Locally tailored health search answers are coming to Nigeria by the end of 2017 and they will include 800 knowledge cards. Google developed this feature in partnership with the University of Ibadan (UI).
7. Suren Ruhela (Head of Google Maps for Emerging Countries) announced that thousands of new addresses have been added to search across certain areas to improve address search experience.


8. Detailed outlines of both residential and commercial buildings across various parts of Lagos have also been added to Maps.

9. More than 100K Nigerian small and medium-scale businesses have also been added to Maps while the number of Google Maps users in Nigeria doubled in the last year.

10. The biggest Maps announcement is that Google Street View is now available in Nigeria, starting with Lagos.


12. She also announced that watch time in Nigeria has grown 120% over the past year with the amount of content uploaded doubling.


13. Highlights of the announcements on the YouTube front is that Google has been testing a new version of YouTube called YouTube Go since June, 2017. The app will be released in Beta by the end of the year.


14. Google CEO Sundar Pichai had a brief interview session with media veteran Adesuwa Onyenokwe on stage. When asked how the experience of being to Nigeria for the first time (apparently he landed in Nigeria last night) has been, Pichai said, “The potential of the country is huge and the energy of the people here is awesome.” He also learned to say “O da bo.”
The event rounded off with a series of panel sessions ending in a discussion between former Nigerian minister and founder of the #BringBackOurGirls movement, Oby Ezekwesili, and Matt Brittin, Google President for EMEA Business & Operations.