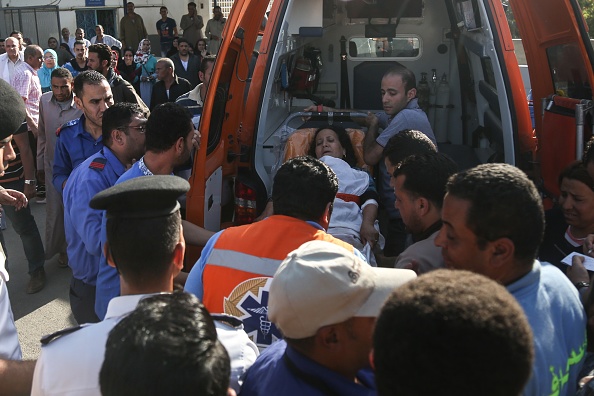 CAIRO, EGYPT – MAY 26: A wounded woman of St. Samuels Monastery attack is taken to the Nasser Institute For Research and Treatment, after the attackers opened fire on a bus carrying Coptic Christians in Egypts southern Minya province, in Cairo, Egypt on May 26, 2017. It is reported that total of 26 people were killed in the attack.

Gunmen attacked a group of Coptic Christians as they were driving to a monastery south of Cairo on Friday, killing at least 28 and wounding dozens including children, the governor of Egypt’s Minya province, Essam al-Bedaiwy, said.

The group was traveling in two buses and a small truck in Minya province, which is home to a sizeable Christian minority, the sources said.

Eyewitnesses said the Copts were attacked as they were going to pray at the monastery of Saint Samuel the Confessor in the western part of the province.

They said masked men stopped the vehicles on a road leading to the monastery and opened fire.

Coptic Christians, who make up about 10 percent of Egypt’s population of 92 million, have been the subject of a series of deadly attacks in recent months.

About 70 have been killed in bomb attacks on churches in the cities of Cairo, Alexandria and Tanta since December.

Those attacks were claimed by Islamic State.

There was no immediate claim of responsibility for Friday’s attack.

The UN Security Council on Friday also condemned the attack.

The council expressed its deepest sympathy and condolences to the families of the victims and to the Government of Egypt, and wished a speedy and full recovery to those who were injured.

The 15-member Council, whose rotating membership currently includes Egypt, began a regularly scheduled meeting on Friday with a moment of silence in honour of the victims.

In a statement that followed, the Council reiterated that “terrorism in all its forms and manifestations constitutes one of the most serious threats to international peace and security.”

“The members of the Security Council condemned in the strongest terms the heinous and cowardly terrorist attack that took place on a bus travelling to a monastery in Minya, Egypt.”

Perpetrators, organizers, financiers and sponsors of these “reprehensible acts of terrorism” need to be brought to justice, the members said.

The statement, issued by the Council President for May 2017, Elbio Rosselli(Uruguay), called on Governments to cooperate actively with the Egyptian Government and all relevant authorities.

“The members of the Security Council reaffirmed that terrorism in all its forms and manifestations constitutes one of the most serious threats to international peace and security.”

The 15-member Council reiterated “that any acts of terrorism are criminal and unjustifiable, regardless of their motivation, wherever, whenever and by whomsoever committed”.