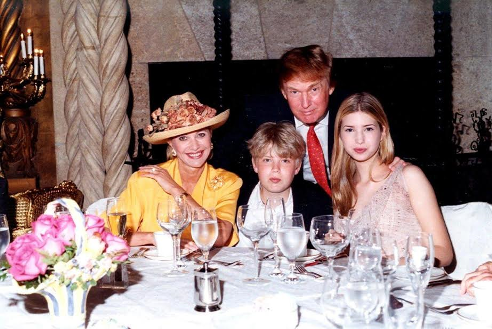 Donald Trump’s ex-wife Ivana Trump has revealed that the Billionaire business man and U.S presidential candidate didn’t really care about raising his kids – Ivanka, Eric and Donald Jr. until he was able to discuss business with them.

Her revelations came about when partygoers at the Lifeline benefit at Le Cirque on Wednesdaycomplimented her on how poised her kids have appeared while supporting their father’s presidential campaign.

“Donald wasn’t really interested in the children until he could talk business with them,” the 67-year-old NYDailyNews.

“When they turned 21, I handed them over to him and said ‘Here’s the finished product, you can take them from here.’ ”

Ivana also revealed she regularly speaks to her ex and has even offered him campaign advice and that she’s happy she won’t be moving into D.C with him if he wins the presidential elections.

“I’m watching the debates very closely,” I tell him to stick to the big issues and to forget about Trump University and Miss Universe because no one cares.”

I’m happy I’m not going to the White House — Washington freaks me out, I can do the speeches, I can kiss the babies, I can do the charities,” Ivana said.

“Melania can’t talk i don’t get the impression that Melania is ‘interested, Donald is going to bring change and no one is going to change him,”