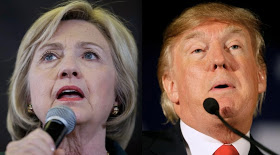 In one of the most savage speeches of her political
career so far, Hillary Clinton, yesterday, threw
away the diplomatic tactics that has characterized
her previous press addresses and went straight
for the jugular, unleashing a series of biting
attacks on presumptive Republican Presidential nominee Donald Trump.

Clinton warned that Trump should not be let
anywhere near the nuclear codes because he
could start a war when somebody “got under his
very thin skin.”

“He’s not just unprepared — he’s temperamentally
unfit to hold an office that requires knowledge,
stability and immense responsibility,”
Clinton said during her speech on National
Security in San Diego, California.

She lambasted his “bragging” approach to foreign
policy based on a string of “nasty tweets” and
accused him of harboring a “bizarre” closeness
with authoritarian leaders like Russian President
Vladimir Putin, the Communist rulers of China and
North Korean dictator Kim Jong-Un.

“We cannot put the safety of our children and
grandchildren in Donald Trump’s hands. We
cannot let him roll the dice with America,”
“He says he has foreign policy experience because
he ran the Miss Universe pageant in Russia,”
Clinton said. “The stakes in global statecraft are infinitely higher and more complex than in the
world of luxury hotels.”

“I will leave it to the psychiatrists to explain his
attraction to tyrants”
“You know, there’s no risk of people losing their
lives if you blow up a golf-course deal,” she said.
“But it doesn’t work like that in world affairs.”
“He also says, ‘I know more about ISIS than the generals do, believe me.’ You know what? I don’t
believe him,”

“This is a man who said that more countries
should have nuclear weapons, including Saudi
Arabia. This is someone who has threatened to
abandon our allies in NATO, the countries that work with us to root out terrorists abroad before
they strike us at home,”

“He believes we can treat the U.S. economy like
one of his casinos and default on our debts to the
rest of the world, which would cause an economic
catastrophe far worse than anything we experienced in 2008,” she continued.

“He has said that he would order our military to
carry out torture.”
“Imagine Donald Trump sitting in the Situation
Room, making life-or-death decisions on behalf of
the United States. Imagine him deciding whether
to send your spouses or children into battle. Imagine if he had not just his Twitter account at his
disposal when he’s angry, but America’s entire
arsenal,” she said.

“Do we want him making those calls — someone
thin-skinned and quick to anger, who lashes out
at the smallest criticism?” she asked rhetorically.
“Do we want his finger anywhere near the
button?”